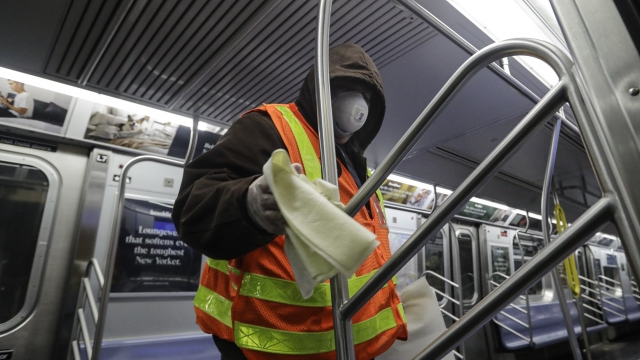 New York City's subway system shut down in the early hours of Wednesday morning for its first round of daily coronavirus cleaning.

Up until this point, the Metropolitan Transportation Authority had been disinfecting trains every 72 hours during the outbreak.

But as New York continues to be an epicenter for the virus, officials decided subway trains and stations should be cleaned every 24 hours. Service will be shut down from 1 a.m. to 5 a.m. every morning for that to happen.

"That might not feel like a big deal. But we have almost 500 stations and we're disinfecting every touchpoint, every place where a rider might touch a railing," Sarah Feinberg, the interim president of the New York City Transit said.

As part of the cleaning plan, more than 1,000 police officers are helping close down the stations and remove any homeless people who've taken shelter inside them.

And alternative transportation, such as buses and vans, is being provided free of charge for essential workers during the hours the subway is being cleaned.

More than 5 million people on average used to ride the New York City subway system every weekday. But the MTA says the state's stay-at-home order has caused ridership to fall by 92%.