DACA Recipients Breathe A Sigh Of Relief With Biden Victory 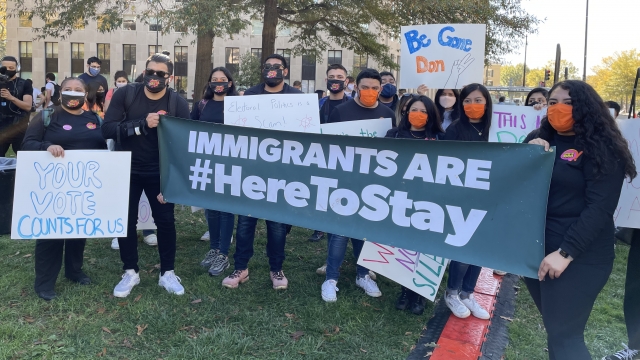 SMS
DACA Recipients Breathe A Sigh Of Relief With Biden Victory
By Ben Schamisso
By Ben Schamisso
November 9, 2020
For DACA recipients and millions of undocumented immigrants, the opportunity to legally stay in the U.S. was on the ballot.
SHOW TRANSCRIPT

Millions of undocumented immigrants and their relatives around the country breathed a huge sigh of relief when President-elect Joe Biden won the election.

"This was such a long day coming. Four years of attacks, four years of terrorizing our community. And we were all together on the day that Joe Biden was elected, screaming, jumping because it truly meant that immigrants are here to stay," said Luz Chavez, a college student in Washington, D.C.

For many "Dreamers" like Luz Chavez, the opportunity to stay in the U.S. was on the ballot.

"Living in fear, not knowing, you know, when we could get deported," she said.

Chavez’s parents illegally brought her to the U.S. from Bolivia in 2002, when she was 4. She didn't know about her undocumented status until she turned 16. Shortly after, she applied for and received DACA.

That's the Obama-era program that protects from deportation undocumented immigrants who came to the U.S. as children.

While President Trump tried for years to end DACA and recently curtailed it, President-elect Biden says he will immediately reinstate the full program.

Besides keeping DACA alive, the president-elect has promised to quickly roll back President Trump's travel bans, asylum restrictions and other hardline immigration actions.

President-elect Biden also wants to work with Congress to provide a roadmap to citizenship for around 11 million undocumented immigrants.

Chavez and her fellow immigrant activists say they are ready to hold President-elect Biden accountable on his campaign promises.

"Our communities have gone through so much these past couple of years, even with the Obama administration. And I know that our community is going to keep on fighting for that no matter what."