DACA May End Soon — How Would That Affect The Economy? 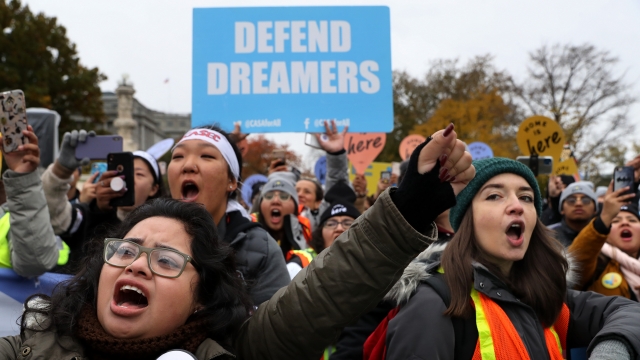 Economists told Newsy that while some employers and cities would take a hit, the national economy would not see a significant impact.

By June 2020, the Supreme Court is expected to rule once and for all on whether the Trump administration can strike down DACA. That's the Obama-era program that shields from deportation almost 700,000 undocumented immigrants who came to the U.S. at a young age. Based on how justices questioned both parties during recent oral arguments, analysts believe the Supreme Court will side with the government.

If that's the case, and unless Congress passes an emergency fix, around 400,000 currently employed DACA recipients would gradually lose their jobs. One of the plaintiffs, Eliana Fernandez, says she would struggle to raise her two American children without her DACA benefits.

But what about the country as a whole? Would DACA's possible termination impact the U.S. economy at all?

During the oral arguments, an attorney for DACA recipients said the White House failed to consider the "dramatic costs to DACA recipients and the economy," when it tried to end the policy in 2017. But economists told Newsy that while some employers and cities would indeed take a hit, the national economy would not see a significant impact.

"There's not enough Dreamers out there to make a large enough difference to the economy that you're going to see it in the aggregate statistics. But what we have take into consideration is we have record low unemployment rates. Employers tell us all the time, 'it's extremely difficult to hire', they can't find qualified workers, and so 'Dreamers,' they're making a big difference to those employers in those areas where immigrants are concentrated."

That's precisely why more than 100 cities and counties — home to 60% of DACA recipients — wrote to the Supreme Court to warn that rescinding DACA would harm their local economies. For example, 35,000 DACA recipients reside in Cook County, Illinois, many of them in Chicago. The county's State's Attorney's Office told Newsy that it "simply cannot afford ... the devastating impact on [the] local economy" if DACA was terminated. But organizations advocating for stricter immigration laws argue that these concerns are overblown.

"What they are clearly not taking into account is that the labor market and the economy, it's dynamic, you know that, it doesn't mean that this economic output will be irrevocably lost. In most cases, it would result in other people moving in and filling those positions. We have historically low unemployment levels, but we still have exceptionally high numbers of people of working age who are outside the labor force at this time, those people need to be brought in."

Beyond the debate on immediate economic risks, there are also long-term concerns about pushing a young, productive and educated population underground. Pia Orrenius of the Federal Reserve Bank of Dallas says the vast majority of DACA recipients would likely stay in the U.S. even if they lose their benefits and protections. And she says that would still be a losing scenario.

"What would happen if you took their work permits away would be that they will take these more menial jobs and earn less. Their tax contributions are going to fall, their living conditions are going to deteriorate. And those employers are going to be left without the workers that they've trained, you know, and benefited from. And so if you think of what's going to happen if we take away DACA, it's kind of a lose-lose."