DACA Goes To The Supreme Court — What's At Stake For Its Recipients? 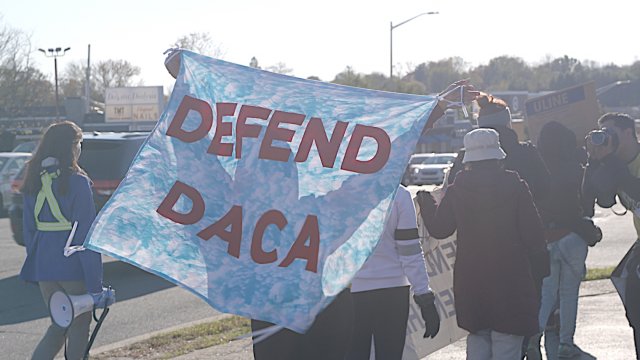 Newsy's Ben Schamisso is spending 24 hours with dozens of "Dreamers" in Pennsylvania. They are marching more than 200 miles from New York City all the way to the Supreme Court to rally support for DACA. That's the Obama-era program that protects from deportation around 700,000 undocumented immigrants who came to the U.S. at a young age.

On November 12, the Supreme Court will hear arguments over whether President Donald Trump’s decision to end that program in 2017 was lawful. Lower courts have blocked that effort but many analysts expect the Supreme Court, this time, to allow the government to strike down DACA. Dreamers say they are marching to remind the public of what's at stake for them and their relatives.

"If DACA were to terminate completely, then I would be separated from my family here, lose my job and my career that I started here and I'm very proud of. And I will be exposed to deportation."

Carolina Fung Feng and Eliana Fernandez are both plaintiffs in one of three consolidated DACA cases the Supreme Court is reviewing. Thanks to DACA, Fernandez says she's been able to secure emotional and financial stability not just for herself, but also for her two American kids. They are among the 250,000 U.S. citizen children who have a parent with DACA, according to the Center for American Progress. Immigrant advocates argue DACA would negatively impact not just recipients but also their families, employers and communities.

"We all used to live together in a one-bedroom apartment. Now that my children have DACA, each of them rent their own apartments. We have a better financial situation."

Advocates are also quick to stress that the vast majority of Americans support DACA. But the legal questions at the heart of the upcoming Supreme Court cases are not tied to the program's popularity.

"If we want to have the rule of law, we can't just have the president being able to rewrite the law whenever he likes, even if that gets you to a result in a particular case that you might like as a matter of policy."

Ilya Shapiro, of the libertarian Cato Institute, co-wrote an amicus brief in support of DACA as a matter of policy, but also in support of the Trump administration as a matter of law. President Obama created DACA in 2012 without Congressional approval. And Shapiro argues that giving the temporary program the full force of law would set a dangerous precedent that future presidents could abuse.

"And if President Obama is to be believed, he said he wasn't changing the law, he was using his discretion. Well, the next president to come along can similarly then be able to use his discretion to rescind that."

Lower courts blocked the Trump administration's attempt to wind down DACA because they say its explanation for doing so — that the policy has "constitutional defects" — was insufficient. But even those courts admitted that the White House "indisputably can end the DACA program" with better reasoning. Shapiro says five Supreme Court justices will likely side with the Trump administration, this time, to avoid delegating too much power to the executive branch.

"Otherwise, you get a ratchet where presidents take certain decisions and then they acquire the force of law, and then they can't be rescinded. So that's, that's the real problem here."

The Supreme Court is expected to issue a decision by June 2020 — in the heat of the presidential election. President Donald Trump recently tweeted that "the Republicans and Democrats will have a deal" to let Dreamers stay in the country "in short order" if the Supreme Court allows him to strike down DACA. Democratic Senator Dick Durbin echoed that sentiment in a recent press conference when asked about a potential emergency fix to DACA.

"I think there is a growing bipartisan sentiment that these DACA recipients need protection. And I think we'd pass it, I really do on a bipartisan basis."

Bipartisan efforts to legalize the status of Dreamers have failed multiple times in the past. In 2018, Trump walked away from a bill that would have provided $25 billion for border security in exchange for a path to citizenship for about 1.8 million "Dreamers" because it didn't include cuts in legal immigration. But the Supreme Court's possible termination of DACA will surely cause immense political pressure to help Dreamers with a legislative fix. And they're ready for that fight.

"I want to remind people in my community, DACA recipients, that whatever happens in 2020 — when we get a decision — we should all remember that we are Americans in every way but papers and our children deserve better. I want to make sure that families like ours can stay together. And they don't have to go through any trauma when it comes to separation."