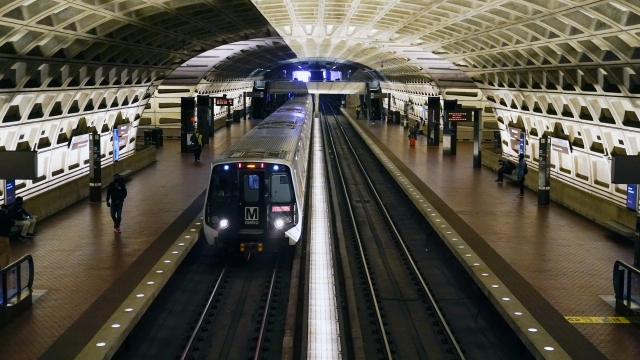 SMS
D.C. Suspends Most Of Its Metro Trains Over Safety Issue
By Associated Press
By Associated Press
October 18, 2021
The axles of more than half of D.C.'s Metro railcars are out of compliance with manufacturer's specifications, including the latest models.

Washington's regional Metro system abruptly pulled more than half its fleet of trains from service early Monday morning over a lingering problem with the wheels and axles that caused a dramatic derailing last week. The ruling promises to complicate daily travel and commutes for thousands of riders for an unspecified length of time while the National Transportation and Safety Board investigates the issue.

The Metro authority's safety commission ordered the withdrawal of the entire 7000-series line of trains at dawn. The Kawasaki-made 7000—series are the newest set of trains in service and the 748 cars comprise about 60% of the fleet.

NTSB Chair Jennifer Homendy told reporters Monday that a design flaw had been identified which caused the trains' wheels to spread too wide on the axels, allowing the carriage to slip off the tracks.

The wheel issue is being blamed for a incident last week in which a train car slipped off the tracks on the Metro's blue line near Arlington Cemetery. Homendy said the car had apparently derailed once and then re-connected with the rails by itself, before derailing a second time. Some passengers were trapped in a tunnel in a dark train car and had to be evacuated on foot.

The safety ruling had already snarled commutes across the nation's capital and the intertwined communities of northern Virginia and southern Maryland. Passengers on social media reported widespread delays with commuters waiting up to 45 minutes between trains and crowding chaotically into whatever space was available.