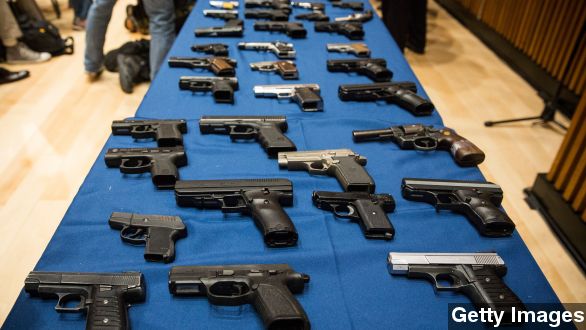 Gun rights advocates are celebrating a long-awaited victory in Washington, D.C. this weekend, after a federal judge struck down the city's ban on handguns in public.

District Judge Frederick Scullin came to the same conclusion many other district courts have reached in similar cases: "The Second Amendment secures an individual right ... to carry a common weapon outside the home for self-defense." The ruling bars D.C. officials from enforcing the public gun ban until they come up with a new licensing law that passes constitutional muster. (Via Getty Images)

It's the second major reversal D.C.'s strict gun laws have seen in recent years. A 2008 Supreme Court case, "District of Columbia v. Heller," overturned the city's total ban on handguns by ruling that the Second Amendment guarantees the right to own a weapon for self-defense. (Via NewsChannel 8)

This latest decision actually stems from a court case which was filed in Aug. 2009, soon after the Heller verdict. But SCOTUSblog notes the case got tangled up in D.C.'s legal red tape for five years, which frustrated the plaintiffs.

"The challengers to the D.C. law tried repeatedly to get a ruling, even asking a federal appeals court to step in to command that the case be decided."

A lawyer for the plaintiffs celebrated the verdict on his blog. "The nation's last explicit ban of the right to bear arms has bitten the dust. ... Congratulations Americans, your capital is not a constitution-free zone." (Via Alan Gura)

Gun control in D.C. is also facing a challenge from Congress. House Republicans approved an amendment to the district's funding bill which would prevent D.C. from enforcing any of its gun laws. (Via C-SPAN)

But no matter what happens to those laws, it will still be illegal to bring a gun into a federal building — as one House staffer learned last week after allegedly bringing a handgun to work. (Via WJLA)

D.C. officials have not yet announced if they plan to appeal the ruling, but a spokesman told reporters the city is currently studying its options.