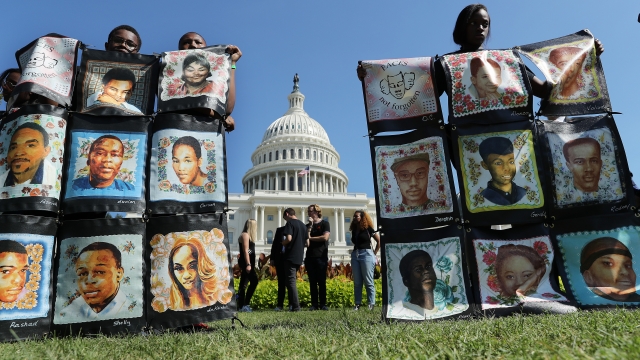 Gun reform advocates gathered outside the Capitol in Washington, D.C., Wednesday to mark the National Day of Remembrance for Murder Victims and send a loud message to lawmakers: End gun violence now.

Hip hop artist Common also appeared at the demonstration and emphasized the importance of connecting with communities that have experienced tragedies.

Newsy spoke with a few of the attendees in D.C., including some who have lost loved ones to gun violence.

Po Murray, chairwoman of the advocacy group Newtown Action Alliance, said: "We needed to learn how to out-shout the gun lobby that's been around for decades, building their capacity and resources. And after the Sandy Hook tragedy, what we've done is change the conversation and we're changing the culture now, to the point where the majority of Americans support common-sense gun laws—background checks, assault weapons ban. And it's just a matter of time before the electorate decides to take action at the polls."

She said: "It's not that I wasn't on board before, but now it's more personal. So, most of the time, it's going to be personal for somebody to get on board. So, being persistent to continue to do this so that they can know that this is important. When you're tired of going to the playground with bullet-proof backpacks on—this is ridiculous. "

Pam Bosely of the group Purpose Over Pain also lost her son to gun violence.

Bosely continued: "They talk about 'We want to take away guns,' we're not asking for that. A lot of constituents are for universal background check and [an] assault weapon ban, so constituents need to talk [to their representatives]. And if they don't do right, vote them out."