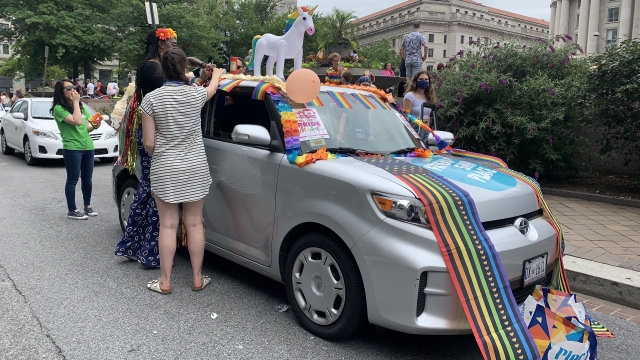 It’s pride month and festivities around D.C. kicked off Saturday with guest appearances from Vice President Kamala Harris, Mayor Muriel Bowser and this little lady that some say stole the show.

But it was the city's first "pridemobile" parade that hundreds gathered to see.

"This is unique because we had to maneuver around COVID. Or what I like to call Miss Rona. But because of that, we still wanted to be able to share our pride and give the community something and doing it like this makes it so that folks are able to participate at their comfort level," Tiffany Royster said.

Tiffany Royster is one of the event organizers and chair of the Capital Pride Alliance, a nonprofit organization dedicated to serving the LBGTQ+ community. She says more than 50 people signed up to show their support by driving their own vehicles for the parade.

"The fact that this is even happening during COVID is even better, because it just shows how important it is, you know, people are, are that much more willing to go the extra mile," Alexander Rivers told Newsy.

"Today, we really get the chance to celebrate who people are and be an ally, you know, show the world that we're out, we're proud, and that we're not going to stand for oppression," Adams said.

For three hours people gathered along the streets to see the motorcade of colorfully decorated vehicles that showcased everything from balloons to flags.

There  was dancing outside and partying inside...as Adams and her friends honked, waved and shouted, "Happy pride" from her Jeep to onlookers as young as three.

"I think you can see all the joy when you just let people be who they want to be," Adams said.

And according to the Capital Pride Chair this might not be the last.

"Honestly, i feel like this could truly be a hybrid. I feel like we can make this something more in the regular like later on in the year," Royster said.