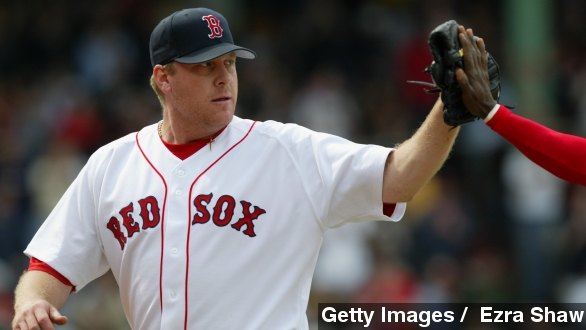 Curt Schilling hasn't pitched in the Majors since 2007, but this past week he was throwing some straight heat.

Schilling sent out this tweet last Wednesday, congratulating his daughter on getting accepted into college and a chance to play college softball.

As the Internet goes, though, that harmless tweet was met with some pretty harsh and vulgar comments. Warning, these tweets contain explicit language.

Here are just a few of the tweets from two users that Schilling posted on his blog. They use graphic language and make sexual references to his daughter.

Schilling decided that instead of brushing the comments off, he'd make the users behind them pay for them.

Schilling zeroed in on these two users in particular — The Sports Guru (@Nagels_Bagels) and Hollywood (@primetime227). He posted on his blog that The Sports Guru was a DJ for Brookdale Community College student radio and Hollywood was a vice president for Theta Xi fraternity at Montclair State University.

And it had big repercussions. Brookdale Community College suspended the student involved shortly after Schilling posted his info on his blog. Brookdale posted on Facebook, "Our sincerest apologies to Gabby Schilling. Her achievement should be celebrated and not clouded by offensive comments."

As for the other user, whose real name is Sean MacDonald, he used to work as a ticket seller for the New York Yankees. Key words: used to.

NJ.com reports MacDonald was fired from his part-time job there shortly after the tweets were posted. A Yankees representative said, "We have zero tolerance for anything like this."

"Nobody should be able to get away with saying things like that a father about their daughter," Schilling's daughter said on ABC's "Good Morning America."

"I'll do everything I can do to not embarrass her, but I'll never not protect her," Schilling said.

One of the accounts was suspended by Twitter, while the other appears to have been deleted entirely.

Schilling apologized to his daughter in his blog post for embarrassing her, but we're thinking she's more so proud of her dad than anything. This is one dad you don't wanna mess with.

This video include a image from Getty Images.