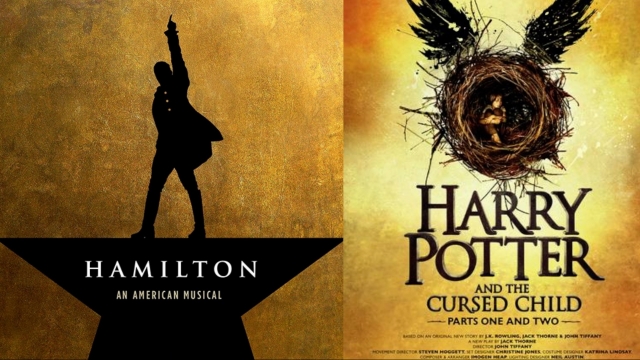 The smash-hit about a grown-up Harry Potter was nominated for a record number of Olivier Awards. That's the U.K.'s version of the Tonys.

"Hamilton: An American Musical" / "Harry Potter and the Cursed Child"

On the surface, Harry Potter and Alexander Hamilton might not seem to have much in common — especially since one is a fictional character.

But they're the subjects of two of the hottest productions on Broadway and the U.K.'s West End.

Now, similar to the record-setting 16 nominations for "Hamilton" at last year's Tony Awards, "Harry Potter and the Cursed Child" is nominated for 11 Olivier Awards.

It's essentially the U.K.'s version of the Tony Awards. And those 11 nominations mean The Boy Who Lived is part of the most nominated new play in the award show's history.

For its part, "Hamilton" won 11 of the 16 Tonys it was nominated for in 2016, including the most prestigious award of them all: best musical.

J.K. Rowling Says Harry Potter Is 'Done' â But We're Not So Sure

After all, there's been a nine-year gap between the seventh Harry Potter book and the "Cursed Child" play.

But similarities between the two productions don't stop there. Both shows are incredibly difficult to get in to see.

Last year, 250,000 "Cursed Child" tickets were sold within just 24 hours of their release.

And tickets were in such high demand for "Hamilton" around the holidays that premium tickets were going for almost $1,000.

Heck, even their posters feature the same yellow background color.

The two will soon be taking over the other's turf. "Hamilton" opens on the West End in November, while "Cursed Child" is coming to the U.S. in 2018.

The move to Broadway will make "Cursed Child" eligible for Tony Award nominations.