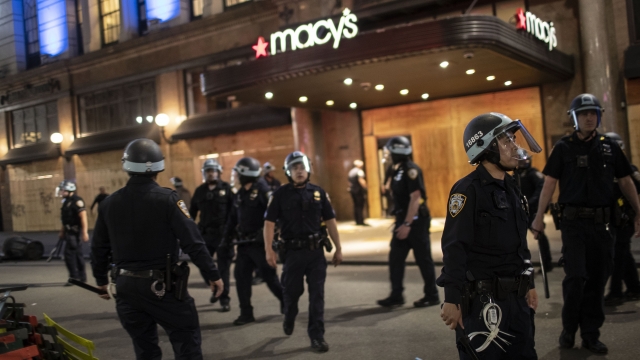 Nationwide protests over the death of George Floyd and police brutality continued for a seventh straight night in the U.S. — despite dozens of cities imposing curfews in an effort to get demonstrators off the streets.

Officials arrested more than 200 people overnight in New York City for looting and setting fires. The arrests occurred after the city's 11 p.m. curfew. That curfew is getting bumped up to 8 p.m. for Tuesday.

Police officers were spotted clashing with protesters in other cities like Seattle, Philadelphia and Chicago. In St. Louis, officials say four officers were shot during protests late Monday night. All four have non life-threatening injuries.

Some demonstrations remained peaceful, including those in Salt Lake City, Phoenix and Fort Worth, Texas.

In Washington, D.C., military helicopters were spotted hovering over protesters. The low-flying helicopters reportedly used a wind-blowing tactic to disperse crowds. The District of Columbia is the one U.S. jurisdiction that can deploy the U.S. military without the governor signing off.

According to CNN, more than 17,000 National Guard troops have been activated to help law enforcement respond to protests in at least 23 states and D.C.