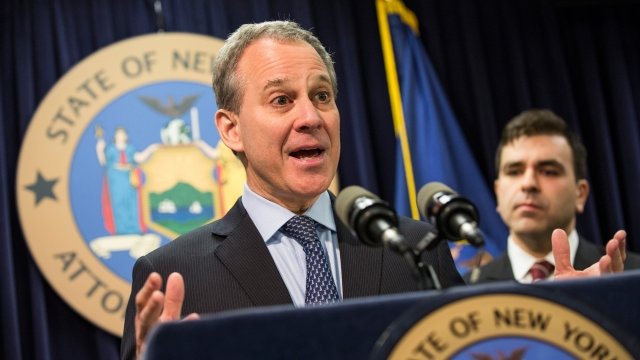 SMS
N.Y. Governor Appoints Special Prosecutor To Investigate Schneiderman
By Katherine Biek
By Katherine Biek
May 9, 2018
To avoid a potential conflict of interest, Gov. Andrew Cuomo appointed a special prosecutor to look into the allegations of abuse.
SHOW TRANSCRIPT

Schneiderman officially stepped down from the job Tuesday.

His resignation came after The New Yorker detailed a string of allegations from four women, who accused Schneiderman of slapping them, choking them and threatening to kill them if they broke up with him.

Schneiderman's denied any wrongdoing, saying, "In the privacy of intimate relationships, I have engaged in role-playing and other consensual sexual activity."

But the governor said that might be a conflict of interest, since Schneiderman had been looking into how Vance's office handled a 2015 case against Hollywood producer Harvey Weinstein. So Cuomo went ahead and appointed the special prosecutor to supersede all other investigations into the allegations.