Cultural Learning In Wild Chimps Observed For The First Time 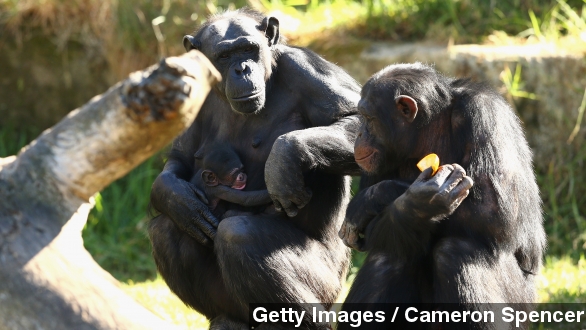 By Sebastian Martinez
October 1, 2014
Cultural transmission — the passing of knowledge from one animal to another — has been caught on camera with chimps teaching other chimps.
SHOW TRANSCRIPT

Scientists have made an unprecedented observation about the way that chimpanzees transmit knowledge from one individual to another in the wild — a building block of chimp culture.

Dr. Catherine Hobaiter, of Saint Andrews University caught the activity on camera as chimps sat to drink at a watering hole. Chimps often use leaves like sponges to drink water — but here you can see the alpha male chimp grabbing moss to add to his leaf to absorb more water. Over time, Hobaiter observed how other chimps who saw that innovation started doing it themselves, until it had spread across the group. (Video via Hobaiter et al.)

Hobaiter and her colleagues mapped the spread and created a model for it In the study, which you can find online in the journal PLOS One. She told the BBC:

DR. CATHERINE HOBAITER, VIA BBC: “We’ve never actually been able to see the start of something new in a wild group spread from individual to individual. And that was the final piece in the puzzle to be able to say, ‘yes, these differences in chimp behavior are cultural.’”

Chimps have particularly interested humans since Jane Goodall’s discovery some 50 years ago that chimps — our closest genetic relatives — use tools in a way we previously thought only humans did. (Video via Yale University)

Cultural transmission — the way animals share knowledge and teach behaviors to one another — has long been a point of interest, especially in primates.

One of the older studies has to do with macaques in Japan, learning to wash sweet potatoes given to them by researchers, and even using saltwater to season them. (Video via Yoshida Wildlife Photo Museum)

And other Japanese macaques who lived near a mountain resort and were fed by patrons, over time developed leisure activities like bathing in the resort’s hot springs. (Video via The Guardian)

But in both of those cases there was human intervention of some kind — where this most recent discovery was purely in the wild. And it’s also worth noting macaques and chimps are pretty distant relatives.

This most recent discovery follows another breakthrough in chimp research this past summer — which also came from a team led by Dr. Hobaiter. (Video via National Geographic)

They studied the way chimps communicate with one another and were able to chart as many as 66 different gestures which the apes use to communicate some 19 different meanings.

Scientists have known for awhile that chimps were capable of cultural learning, having previously observed it in captivity.