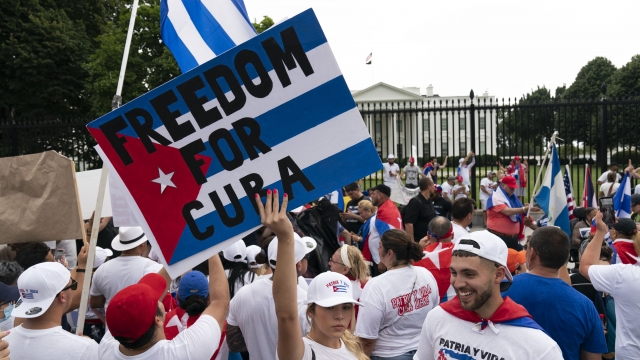 Desperation, anger and anguish growing by the hour within the Cuban community.

That's what hundreds of Cubans shouted outside the White House, asking President Joe Biden to help Cubans on the island.

"People in Cuba on the street, they are being beaten, they are being taken to jail," Cuban social media influencer Alex Gonzalez said. "Some people have been killed for protesting, for asking for freedom."

Los Pichy Boys have been at the forefront of the global response supporting the uprisings in Cuba against the communist regime in place for 62 years.

"What are you guys exactly want from the Biden administration?" Newsy reporter Axel Turcios asked Gonzalez.

Gonzalez replied: "We want an intervention from the administration. We want Biden to make a strong statement about the Cuban regime that the killings must stop."

The Cuban American comedians, content creators and social activists used their social media platforms with a combined reach of 1 million followers to raise awareness and call out for action in Washington.

Hundreds of Cubans from all over the country, all ages and especially the young, came here to Washington chanting the same thing: "libertad," freedom, and "intervencion," intervention. They’re asking for the freedom of their fellow Cubans on the island.

Some young Floridians like Daniel Cruz, who was born in Cuba, hit the road in caravans on a 15-hour drive to Washington.

After a week of uprisings on the island, videos like this showing Cubans being beaten were harder to get online because the regime blocked and limited the internet.

"He can order the State Department at the United States Department in the heart of Havana to turn on the internet," Salazar said. "Not only that, we can put a tower in Guantanamo."

Dozens of people in Cuba have been arrested and some are still missing.

"The regime took your brother and you don’t know anything about him?" Turcios repeated in English.

He replied, “No solo se llevo a mi hermano, se llevo a su esposa": "They not only took my brother, they took his wife."

Former Cuban political prisoner, Jorge Luiz Garcia Perez, known as “Antunez,” says his brother and sister-in-law were arrested during protests on the island.

"The Cuban matter is not a matter only for people that live in Cuba, it's a matter of national security, too, because they are exporting communism to Nicaragua, to Venezuela, to Colombia," Gonzalez said.

The historic uprisings in Cuba are in response to the island's shortage of food, medicine and rising COVID-19 cases.