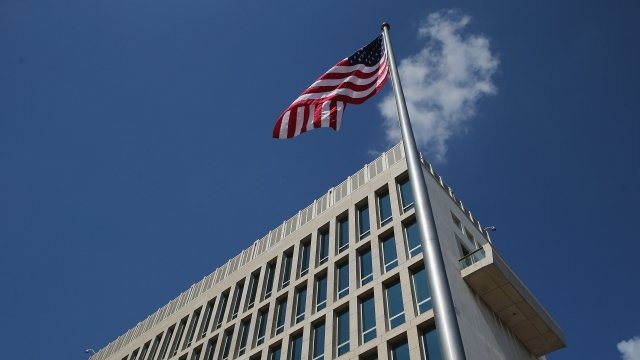 SMS
Cuba Says Officials Can't Find Cause Of Mysterious Medical Symptoms
By Katie Cammarata
By Katie Cammarata
June 11, 2018
According to Cuba's foreign ministry, an official at the U.S. Embassy in Havana said they heard "'indefinite sounds' in their place of residence."
SHOW TRANSCRIPT

Cuba's foreign ministry says officials can't find the cause of the mysterious medical symptoms that affected a U.S. Embassy official there last month. According to the ministry, the employee said they heard "'indefinite sounds' in their place of residence."

This might sound kind of familiar. One employee at a U.S. consulate building in China was reportedly diagnosed with a mild traumatic brain injury after reporting "abnormal sensations of sound and pressure." The U.S. later sent a number of consulate employees back to the U.S. for more health screenings.

And it's happened before in Cuba, too. Diplomats stationed at the U.S. Embassy in Havana started reporting strange illnesses and "sonic attacks" late in 2016. More than 20 people had confirmed injuries, and some of them even suffered hearing loss or brain injuries.

Eventually, more than half of the U.S. Embassy staff in Cuba was removed.

On June 5, U.S. Secretary of State Mike Pompeo announced that he created a task force to respond to the "unexplained health incidents that have affected a number of U.S. government personnel and family members stationed overseas."