After Thaw In Relations With U.S., Cuba Fears A Return To Hard Freeze 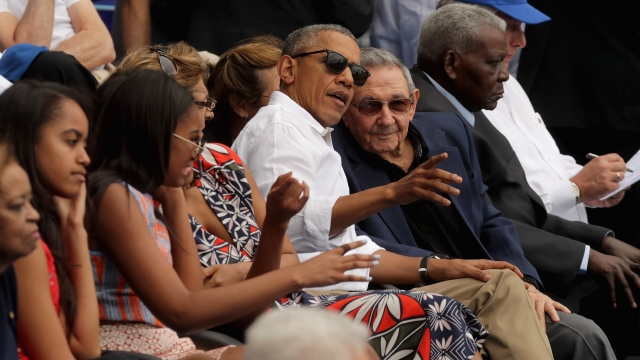 Obama said: “Today the United States of America is changing its relationship with the people of Cuba. In the most significant changes in our policy in more than 50 years, we will end an outdated approach that for decades has failed to advance our interests. And, instead, we will begin to normalize relations between our two countries.”

Now, one of Cuba's top diplomats fears the Trump administration is determined to replace Obama's thaw in relations with another hard freeze.

Carlos Fernández de Cossío is the Cuban Foreign Ministry's director for U.S. Affairs. On Monday, he said recent U.S. sanctions against Cuba signal a move to sever relations once again. He said he hopes that doesn't come to pass.

Speaking to reporters at a Havana conference on U.S.-Cuban relations, he said: “There are powerful people today in the U.S. government that want to increasingly apply hostile measures and sever our bilateral relationship. If that were to be the case, we are ready to face that reality, but it is not what the people of Cuba want and not what the government of Cuba is seeking.”

Fernández de Cossío says he worries about what President Trump wants for Cuba because of rhetoric such as this:

“We are proudly supporting the great people of Venezuela, Cuba and Nicaragua in their righteous struggle for freedom, you know that. And to those who would try to impose the horrors of socialism on our country, I say again tonight: America will never be a socialist country, ever.”

A State Department official told Reuters that the U.S. has "no plans to break off diplomatic ties at this time." The official said the administration wants Cuban Leader Raul Castro, Fidel's brother, to end support for Venezuela's socialist president Nicolás Maduro and cease the "Castro regime's abuses of its own people."

It's quite a change from this, when Obama visited Havana in 2016:

“Today as the president of the United States of America, I offer the Cuban people el saludo de paz." After that "greeting of peace," he went to a baseball game with Raul Castro.