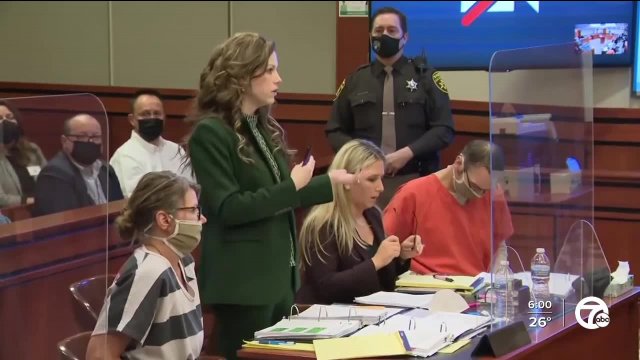 There were major developments Tuesday in the case against Jennifer and James Crumbley, parents of the accused Oxford High School shooter.

For the first time, the reality of what's happened seemed to set in, for both parents and it came after hours of testimony.

Restrained by shackles, defendant Jennifer Crumbley had tears wiped from her face by her attorney.

After hours of witness testimony, she was seen breaking down after hearing a 911 call her husband James Crumbley made Nov. 30, the day of the mass shooting that claimed four lives and left seven injured.

Both Jennifer and James are charged with involuntary manslaughter in the case.

On the stand, multiple witnesses told the judge Jennifer spoke of spending her time dating outside the marriage and focusing on horse riding as her son Ethan cried out for help and complained he was haunted by demons.

A detective on the case talked about a shooting target Ethan practiced firing into with a gun his parents allegedly bought him prior to being busted looking up ammo at school.

The detective also pointed to various social media posts of Ethan bragging about his gun.

On the day of the tragedy at Oxford High, a co-worker of Jennifer's recalled a meeting she was told of at the school that morning.

"She said they were concerned with his drawing. I said she should have brought him home. I felt it was a disturbing photo and this child needed to be around family," said Amanda Holland.

Jennifer's co-workers recall her saying she felt like a failure of a parent.

Witnesses further said Jennifer was preoccupied with losing her job and selling her horses after the mass shooting as she sent texts from burner phones.

The story was originally published by Simon Shaykhet on wxyz.com.