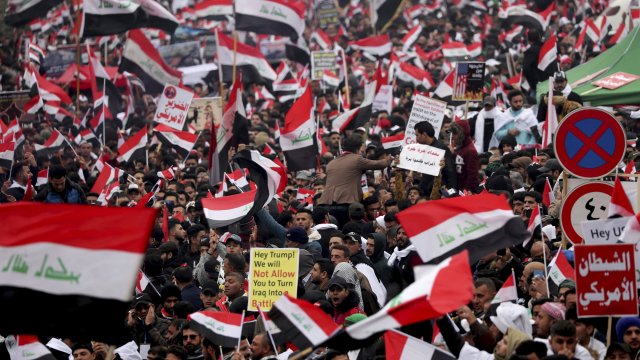 Thousands of protesters gathered in Baghdad Friday to demand the withdrawal of U.S. troops from Iraq.

Photos from the demonstration showed large crowds gathered at a central square in Baghdad. Loudspeakers blasted "No, no America" while protesters held Iraqi flags and signs urging the U.S. to leave the country.

Organizers had hoped to recruit a large number of protesters to attend the event. A powerful Shiite cleric called for a "million-man" march, but the number of demonstrators fell short of that.

After the strike, Iraq's parliament approved a resolution calling on the government to dismiss foreign troops from the country. But the measure was non-binding, and the Trump administration has said it isn't planning to pull American troops from the region.