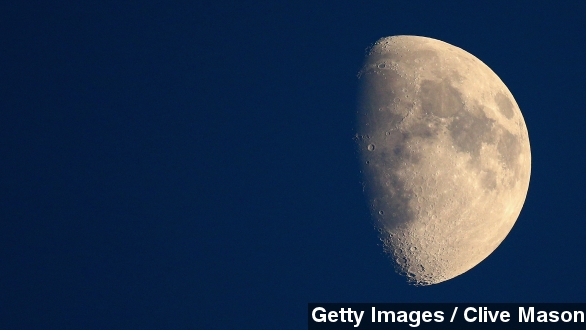 SMS
Crowdfunded Moon Mission Offers To Store Your Digital Memory
By Cliff Judy
By Cliff Judy
November 19, 2014
Lunar Mission One is offering to send your digital memory (or even your DNA) to the moon to be stored for a billion years.
SHOW TRANSCRIPT

An ambitious space project hopes the idea of preserving a piece of yourself in the cosmos for millennia is enough to get you to invest.

Lunar Mission One, which dubs itself "the most inspirational Moon project since the Apollo landings," wants to raise nearly $1 million on Kickstarter over the next month with plans to drill into the moon's surface.

RICHARD HOLDAWAY, DIRECTOR OF RAL SPACE: "There's a lot of science that's been carried out on the moon, but never below the surface. ... Because it has to drill down to be able to bring out core samples, it's going to put something back in." (Video via Lunar Mission One)

That something back in, as we said, could be a piece of you. (Video via Lunar Mission One)

And we mean that both figuratively and literally. Donors who reach a certain level can send Lunar Mission One with a digital hard drive of essentially whatever they'd like preserved.

The mission also claims you can also even preserve your DNA for a billion years by sending along a strand of hair.

As far as the point of the mission, which is slated for 2024, the British researchers believe Lunar Mission One's drilling could tell us more about the origins and development of the moon and Earth along with looking for subsurface water. (Video via NASA)

This certainly isn't the only commercial lunar exploration in the works. Google's offering $30 million to the winner of its Lunar X Prize to land a robot on the moon, move it 500 meters across the surface and send HD video back to Earth.

But just think of the urban legends and the conspiracy theories that could go with this one!

Instead of Walt Disney cryogenically frozen in some super secret vault, DNA stored in the underground of the moon.

That long-awaited, second solid angle to supplement the Zapruder film could someday get loaded onto a spaceship to be buried 240,000 miles away from Earth.

Alright, that's all a bit of a stretch. And to be fair, it doesn't look like you're exactly running out of time to sign up. The highest levels of donation for Lunar Mission One currently appear to have plenty of spots still available.