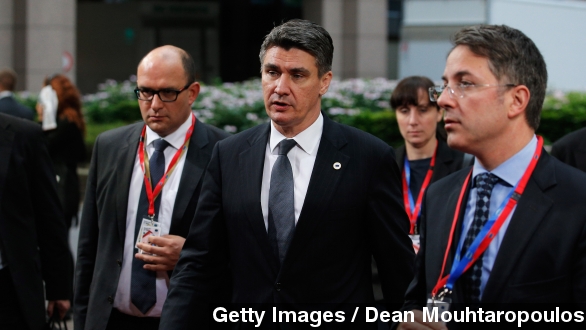 SMS
Croatian Government Cancels Debts Of Its Poorest Citizens
By Matt Picht
By Matt Picht
February 1, 2015
Croatia's government has convinced private lenders to wipe out the debts of about 60,000 of the country's poorest citizens.
SHOW TRANSCRIPT

Thousands of Croatia's poorest citizens are getting a second chance Monday thanks to an unprecedented government plan to wipe out up to $320 million worth of private debt.

The initiative, dubbed a "fresh start" by the Croatian government, applies to anyone without property or savings who has a monthly income of less than 1,250 kuna — that's about $183. Those citizens will have their debts worth up to $5,100 cancelled. (Video via BBC)

But the government isn't paying out creditors to forgive their debts — rather, Croatian Prime Minister Zoran Milanovic has convinced multiple cities, banks and private companies to simply absorb the losses. All told, the program is expected to affect 60,000 citizens.

Milanovic's government hopes forgiving these debts will have long-term benefits for the country's troubled economy. More than 317,000 Croatians can't access their bank accounts due to debt problems, and the move will let almost 20 percent of those citizens back into the financial system. (Video via Euronews)

The Washington Post points out this move affects less than 1 percent of the country's $4 billion worth of private debt.

But the Post also spoke to economist Dean Baker, who was skeptical of the initiative. He told the outlet, "If lenders think this can happen again, they will charge very high interest rates to low-income borrowers."

Croatia's economy has been stuck in a recession for six years and is heading for a seventh in 2015.