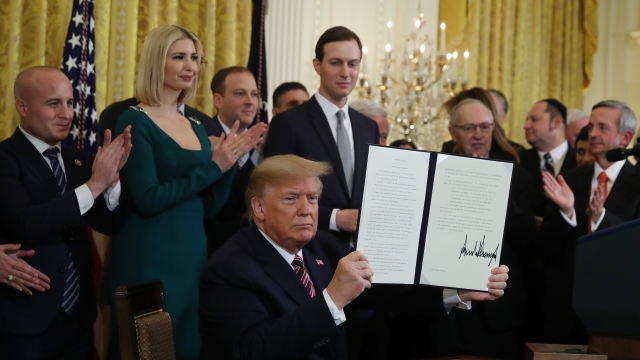 SMS
Critics: Trump's Executive Order Could Chill Criticism Of Israel
By Adam Elrashidi
By Adam Elrashidi
December 11, 2019
The order is intended to bolster the Education Department's effort to tackle antisemitism on college campuses, but critics say it could stifle debate.
SHOW TRANSCRIPT

The order was reportedly crafted over time by the president's senior adviser and son-in-law, Jared Kushner. Under the expanded definition, it says discrimination against Jews can be a violation of Title VI when "based on an individual's race, color or national origin." The order includes terms codified by the International Holocaust Remembrance Alliance (IHRA), of which the U.S. is a member.

The IHRA's definition includes "denying the Jewish people their right to self-determination" and "claiming that the existence of a State of Israel is a racist endeavor." In addition, the order also adopts the language of a long-stymied bill supported by both Republicans and Democrats in Congress, known as the Antisemitism Awareness Act.

The president has often received criticism for remarks considered by some to be antisemitic. In August, for example, President Trump accused American Jews of "great disloyalty" for voting for Democratic candidates. Still, he has repeatedly reaffirmed his commitment to the American Jewish community and Israel — and often links the two together.

White House officials say Wednesday's order is designed to help the Education Department tackle what the administration views as antisemitism and anti-Israel bias in higher education. The new interpretation of Title VI would allow the department to withhold funding from colleges or education programs it believes are discriminatory due to antisemitism.

In September, the agency ordered the University of North Carolina at Chapel Hill and Duke University to remake their joint Middle East studies program after alleging it offered a biased curriculum that overemphasized Islam.

The terms outlined in the executive order are in line with the Obama administration's interpretation of Title VI. But critics decry the measure as an attack on Palestinian rights activism in the U.S., saying it effectively seeks to curb speech critical of Israel and its occupation of Palestinian territories.

The United Nations says Israeli settlements there are illegal under the Geneva Convention. The Trump administration and Israel have rejected that declaration.

Omar Baddar is the deputy director of the Arab American Institute. He told Newsy that antisemitism is a real and rising threat. But he said criticism of the Israeli government is a separate issue and protected speech under the First Amendment. He said the order would restrict the ability for people to have an "honest conversation" about Israel and U.S.-Middle East policy.

Baddar said: "We've already seen these efforts before under the Obama administration previously, where there were multiple complaints that were raised against pro-Palestine students on campus about supposedly engaging in antisemitic harassment simply by holding Palestinian events. And the Obama administration's civil rights division shut those criticisms down, insisting that what was happening on campus was simply an expression of free political speech."