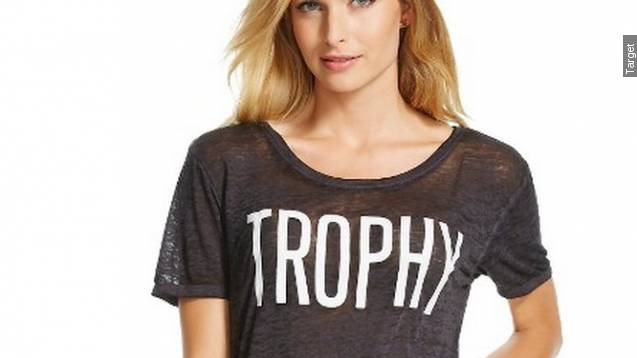 SMS
Critics Say Target's 'Trophy' Shirt Reinforces Rape Culture
By Christine Slusser
By Christine Slusser
July 22, 2015
A petition wants Target to discontinue its women's shirt with the word "Trophy" on it, but the retailer claims it's received a "positive" response.
SHOW TRANSCRIPT

Target's slogan tells us to "expect more" and "pay less."

And some were certainly expecting more of the retailer after it came out with this women's shirt with the word trophy on it.

"It's kind of making women feel like they're just an object," one woman told ABC.

A Change.org petition is trying to get the shirt removed; the post's opening line defines the word trophy.

As of Wednesday morning, there were over 11,000 supporters.

Target responded on Twitter, saying, "It's never our intention to offend anyone with the merchandise we carry."

Target also said in statements the shirts are part of an engagement and wedding collection, and that the response has been "overwhelmingly positive."

But the shirt is also found in the juniors section. You know ... in that age range where women likely aren't getting married ...

Along with others shirts that say things like: "This is my backstage pass."

The collection also has shirts that say "Mrs." and "Team Bride."

Last year, the retailer was also called out for a little girl onesie that said "I only date superheroes," while the male version read "Future man of steel."