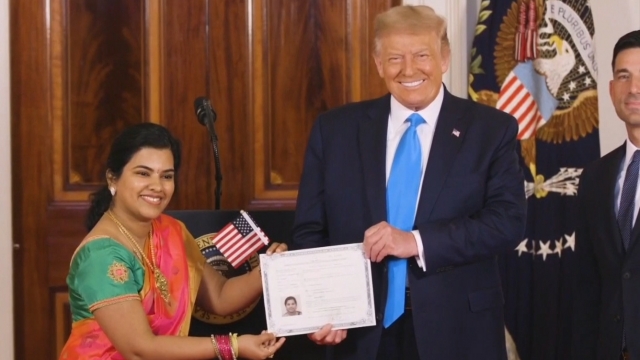 SMS
Critics Call RNC Citizenship Ceremony 'Hypocrisy On A Galactic Scale'
By Ben Schamisso
By Ben Schamisso
August 26, 2020
Advocates point out that naturalizing is getting harder and slower under President Trump. And a new a rule will nearly double the fee to apply.
SHOW TRANSCRIPT

Critics are livid after President Trump presided over a naturalization ceremony on Tuesday at the Republican National Convention.

"You followed the rules, you obeyed the laws, you learned your history, embraced our values and proved yourselves to be men and women of the highest integrity," President Trump told five new Americans after they took the Oath of Allegiance on TV.

"It's hypocrisy on a galactic scale," said Doug Rand, who worked on immigration policy in the Obama White House as Assistant Director for Entrepreneurship.

Experts also point out that gaining U.S citizenship has become a lengthier and harder process under the Trump administration.

"The Trump administration just put a lot of emphasis on vetting the details of the applications and on fraud detection. And that just made the process longer and more intensive," said Randy Capps, the director of research for U.S. programs at the non-partisan Migration Policy Institute.

For nearly three months, the Trump administration canceled most citizenship interviews and ceremonies, saying they wanted to keep applicants and staff safe during the pandemic.

At the same time, immigration officials rejected bipartisan calls to administer the Oath of Allegiance remotely because of "logistical challenges" and "security concerns."

U.S. Citizenship and Immigration Services, the agency that oversees legal immigration, tells Newsy it's working around the clock to make up for the lost time. But analysts estimate that hundreds of thousands of people who were on track gain citizenship in time to vote in the 2020 election may now miss out on that opportunity.

"It's a few hundred thousand people that USCIS would have to complete various procedures for in time for the election at a time when they don't appear to have the resources to do that," Capps said.

That could impact some swing states on election day.

"The margins were really, really close in Pennsylvania, Michigan, Wisconsin last time. And, you know, even a few thousand might make a difference there Or it could have a big impact in Florida. There are a lot of people naturalizing there, even possibly Arizona or Texas," Capps said.

Starting on October 2nd, the Trump administration will nearly double the fee to apply for citizenship, from $640 to $1,170. It will also make it harder for low-income applicants to qualify for a fee-waiver.

USCIS, which is almost entirely funded by the fees it collects from applicants, says the changes are necessary to recover the agency's costs of services.

But critics say the move could be an intentional attempt to price out poorer immigrants.