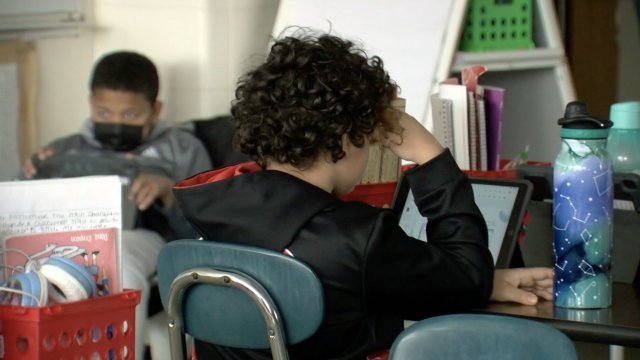 SMS
Critical Race Theory Ban Could Stop OK Students From Learning History
By Allison Herrera
By Allison Herrera
April 12, 2022
Republican legislators have tended to define CRT as anything that can teach people they might be inherently evil based on their race or gender.
SHOW TRANSCRIPT

In the 1830s, thousands of Native Americans were forcibly removed from their homelands in the southeast to Indian Territory on the Trail of Tears.

In 1921, hundreds of Black Tulsans saw their neighborhood burned to the ground by a white mob during  the Tulsa Race Massacre.

But some Oklahoma school children may never learn that history — at least not in the classroom.

Educators and lawmakers in Oklahoma fear that these two painful events may be left out of the classroom curriculum under a new bill that Oklahoma lawmakers recently passed.

"This bill says that we're not going to teach people that because of their race or their sex, they are inherently evil for something that they had nothing to do with," said Oklahoma state Rep. Kevin West. "So that's what this bill talks about, and I'll be happy to go through point by point with it, with you."

The law creates a broadly defined ban on “discrimination, stereotyping, scapegoating, [and classification]” based on race and sex while also placing new limits on diversity training in schools.

Some school district leaders say the bill is an attempt to stop critical conversations about race in the classroom, like Cherokee Nation Principal Chief Chuck Hoskin Jr., who says the legislation has a chilling effect.

Some Cherokee children get their education at the Sequoyah schools in Tahlequah, Oklahoma, where the tribal nation decides on the curriculum and there is no such ban in place. But, the majority of children living within the Cherokee Nation reservation go to Oklahoma Public schools.

Oklahoma State Representative Monroe Nichols, who represents Tulsa and parts of Greenwood, agrees. He sees HB 1775 as an attempt to limit difficult conversations.

"I think about the the painful past that we've been through as a country, and what got us to a better place was folks meeting the issue of inequity, a segregation of hate, head on," Nichols said. "And that's the only reason that I'm sitting in this chair I'm sitting in today."

Nichols said Oklahoma legislators are responding to a national conspiracy and a problem that doesn’t really exist.

"I would say this only reinforces for teachers the need to make sure students are having these conversations because we are quickly getting ourselves to a place to where leaders, particularly in conservative states, are trying to shut down our ability to appropriately educate kids preparing for the future ," Nichols said.

Hoskin Jr. has already seen educators in other states question the teaching of the Trail of Tears.

A school board member in Texas recently called for removing a children’s book that talked about what Cherokees went through on the Trail of Tears.

He’s since spoken out about it, and he has a book recommendations of his own for public schools — something that could spark difficult conversations about Indigenous history in Oklahoma.

" Angie Debo and Still the Waters Run, that is a book that ought to be required reading for every Oklahoman, every public school student," Hoskin Jr. "And I think it's the kind of book that if you ask some folks who are putting together books that make people uncomfortable."

Oklahoma’s CRT Bill HB 1775 is currently being challenged by the ACLU of Oklahoma, who says the law is unconstitutional.

According to the Oklahoma Department of Education, there have been two unfounded allegations that classrooms in the state violated the law.