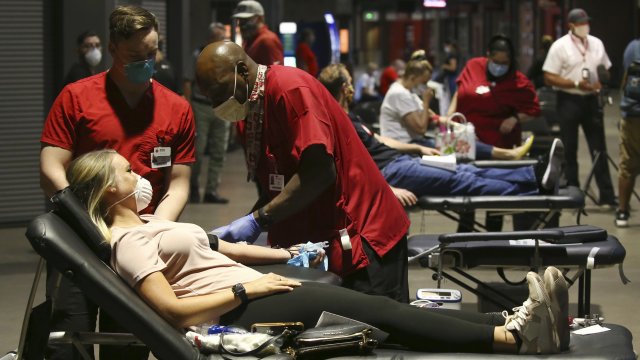 SMS
Critical Blood Supply Shortage Creates Concern For Laboring Moms
By Maritsa Georgiou
By Maritsa Georgiou
January 27, 2022
Hospitals like to have at least five days' worth of blood on hand, and right now, many in the U.S. have less than one day of supply.

The Red Cross says every two seconds somebody needs a unit of blood in the U.S.

But nationwide, as Omicron continues to sweep across the country, a critical blood supply shortage — the worst in over a decade — is keeping health care workers up at night.

Hospitals like to have at least five days' worth of blood on hand, and right now, many in the U.S. have less than one day of supply on hand, causing health officials to ration and prioritize blood while they beg for people to donate.

Blood donations overall dropped 10% since March of 2020, and the pandemic caused a 62% drop in college and high school blood drives. Plus, staffing shortages from COVID surges are compounding the already bad situation.

"Unlike a regional natural disaster, a weather event, this is something that's affecting the whole country," said Dr. Baia Lasky, medical director of the American Red Cross.

In Missoula, Montana, public health officials are now warning people not to get into car crashes because the hospitals don’t have enough blood. And they’re not just worried about car crashes or other large scale accidents.

"Sometimes life happens, and there's unexpected car accidents or there's somebody who's delivering a baby and there are unexpected complications," pathologist Dr. Nicole Finke said.

Those are complications LeeAnne Rimel knows all too well. She learned the value of blood donations when she gave birth in 2020.

"I probably would have died if I did not have that blood transfusion," Rimel said.

She delivered a healthy baby girl, but it led to internal bleeding and a major medical trauma for Rimel.

"Everything went really, really great and was, you know, kind of easy peasy until it wasn't," Rimel said. "It was within a matter of five minutes that all of a sudden I needed tons and tons of blood from the local blood bank."

She got 10 units of blood from strangers.

"I think often about the people who donated blood that helped me," Rimel said.

Rimel became a regular donor after that, and when she heard about the recent nationwide blood shortage, it brought her right back to that hospital room.

"It's giving me chills to think about what would happen for moms who would go through that without having blood in the blood bank," Rimel said.

Her story is exactly what medical workers are worried about.

"I've been involved with pregnancies that had unexpected complications that took up to 80 units," Dr. Finke said. "We don't have 80 units in town at this point in time."

At one point this month, the entire city of Missoula was down to a single unit of platelets as they waited for more to come in on a passenger flight from multiple states away.

"So only having a single unit is very scary if a car accident happens, if a delivery goes not the way that we expect it to," Dr. Finke said. "We didn't have enough products on the shelf, and so I was lying there awake at night thinking hopefully nothing happens. When I pull open our shelves that are normally full of product and there's just a couple units there. It is terrifying."

And Omicron isn't helping the problem. The surge plus winter weather caused many canceled flights, creating another challenge for doctors.

"For women who are in labor that cannot wait when the baby comes... it can be the [split] decisions that physicians have to make for a laboring woman," Dr. Lasky said.

Health officials expect the shortage to continue in much of the country for at least a couple more months.

"We just hope that everybody's not out at the exact same time, which is a very strange way to write your health care — that you're hoping to be lucky and you're hoping on hope — but that's what it is right now," Dr. Finke said.

That's the current standing — hoping to be lucky and hoping more people will roll up their sleeves.

"The good news about this shortage is that we can control it," Dr. Finke said. "As a human I can go and I can donate a unit of blood every 56 days. It's so appreciated. It saves a life. Each donation can save up to three lives."