Crisis In Yemen: Why US, Iran Don't See Eye To Eye 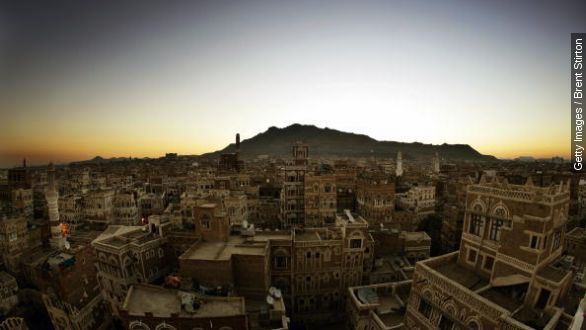 SMS
Crisis In Yemen: Why US, Iran Don't See Eye To Eye
By Jake Godin
By Jake Godin
April 9, 2015
The U.S. and Iran might have agreed on a tentative framework for a nuclear program, but they seem to have opposing views on the crisis in Yemen.
SHOW TRANSCRIPT

In Yemen, two opposing views between the U.S. and Iran. (Video via Ahmed Sayaghi)

"And Iran needs to recognize that the United States is not going to stand by while the region is destabilized or while people engage in overt warfare across lines, international boundaries and other countries," U.S. Secretary of State John Kerry told PBS Newshour Wednesday.

That was Wednesday, not even a week after finishing a marathon nuclear negotiating session with Iranian Foreign Minister Javad Zarif.

While Iran and U.S. diplomats may have reached an agreement in Lausanne, Switzerland, the two nations still have very different views on the Saudi-led coalition conducting airstrikes inside Yemen. (Video via YouTube / قلعة الشموخ)

The U.S. supports Saudi Arabia, which along with its allies in the Gulf and North Africa, is attempting to reverse the significant gains made by Houthi rebels since earlier this year. (Video via Al Jazeera)

The coalition and U.S. claim Iran, which is a Shiite nation, is supporting the Zaidi Shiite Houthis. It's seen as part of a larger proxy war for influence in the Gulf between Sunni Saudi Arabia and Shiite Iran. (Video via Al Arabiya)

The U.S. isn't conducting any military operations against the Houthis, but it is helping the coalition by offering logistical support, such as refueling planes and providing intelligence. (Video via U.S. Air Force / Tech. Sgt. Robert Smith)

Iran, on the other hand, has publicly denounced both Saudi Arabia and the operation. Iranian President Hassan Rouhani called for an end to the military intervention on Thursday, saying "You do not know how this will end. This path is wrong."

That’s not to say Tehran is calling for an end to fighting between Houthis and forces loyal to the U.S.-backed government — that's something that arguably helps Iran more than not. (Video via YouTube / أبو عمرو الأوسي)

Iran also denies arming or giving logistical support to the Houthis, though on Wednesday it sent two warships to Yemen's coast. Tehran claims they're for an anti-piracy operation, but it's not hard to see the move as an attempt at military posturing. (Video via YouTube / قلعة الشموخ)

Iran isn't alone in pushing for an end to the fighting either. Turkey, Russia, the United Nations and the European Union have all also shown support for a diplomatic solution.

On Wednesday, the U.N.'s Special Rapporteur on human rights of internally displaced persons warned of a "worst case scenario" for Yemenis as they're further displaced by a worsening conflict. (Video via Palestine Today TV)

By the World Health Organization's most recent estimate, more than 540 people have been killed and around 1,700 wounded in violence in Yemen since March 19.