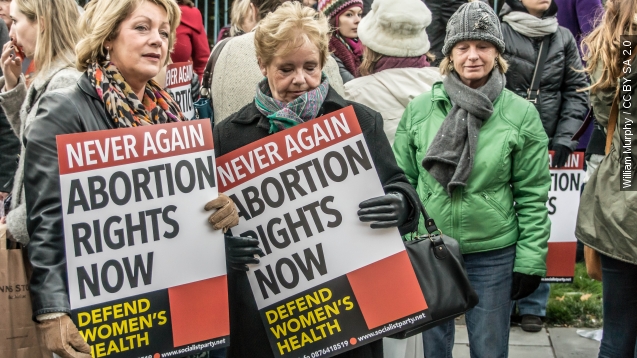 When Ireland legalized same-sex marriage through a national referendum last month, many greeted it as a progressive victory. (Video via YouTube / Cian Mac Mahon)

"Ireland has just taken bounds and leaps forwards to ensuring that everyone is equal in this country," one man told Channel 4.

But an Amnesty International report released Tuesday says when it comes to abortion, Ireland is actually less progressive than almost everyone else in Europe. (Video via Vice)

The report, entitled "She Is Not a Criminal," argues Ireland's criminalization of abortion violates human rights and "only Andorra, Malta and San Marino have more restrictive laws, prohibiting abortion in all cases."

The strongly Catholic country codified the church's opposition to abortion through a popular referendum in 1983, which led to a constitutional amendment equating the right to life of the mother and fetus. (Video via RTE)

For perspective on just how much influence the church has wielded in Ireland, the country wouldn't legalize divorce until 1996. (Video via EWTN Ireland)

There have been a couple high-profile cases that have drawn out opposition to the country's abortion law, such as the 2012 death of an Indian dentist in Ireland. The dentist died of blood poisoning after doctors refused to terminate her pregnancy. (Video via YouTube / Parentesidicristallo)

More recently, in 2014, an asylum seeker who said she was raped in a war zone told The Irish Times she was denied an abortion in Ireland, despite having allegedly expressed suicidal intentions.

In most cases, the Amnesty report says Irish women seeking abortions travel to the United Kingdom, which has more liberal abortion laws. The report says 10 to 12 women make the trip every day. (Video via BBC)

Public opinion within Ireland on abortion isn't clear but seems to show growing support for legal abortion. A 2010 poll found 60 percent of 18- to 35-year-olds support it, and a 2014 poll found a majority overall favor a new referendum on the issue. (Video via Irish Examiner)