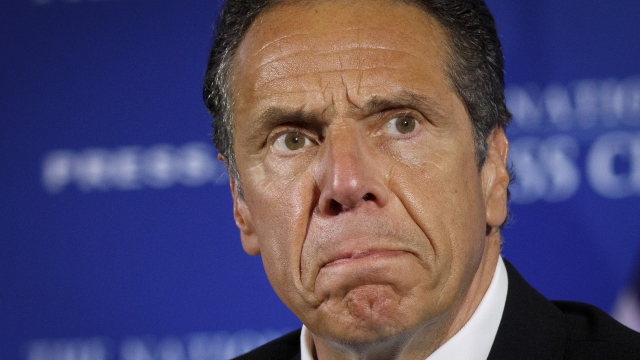 A criminal complaint filed by a police investigator with a court in Albany has accused former New York Gov. Andrew Cuomo of committing a misdemeanor sex crime, though there were reports Friday that the document might have been submitted in error.

The brief complaint, filed by an investigator with the Albany County Sheriff's Office, accused Cuomo of putting his hand under a woman's shirt Dec. 7, 2020. The document didn't name the woman, but Cuomo had been publicly accused of groping an aide, Brittany Commisso, at the executive mansion in Albany last year.

The Albany County district attorney's office and Albany County Sheriff did not immediately return messages, but the Times Union of Albany quoted unnamed officials as saying the complaint had been issued "prematurely" by the court and that a final decision hadn't been made about whether Cuomo would face charges.

Commisso, who was an executive assistant for Cuomo, says he reached under her shirt and fondled her when they were alone in a room at the governor's mansion in Albany late last year.

She said Cuomo pulled her in for a hug as she prepared to leave the governor's office at the mansion. When she told him, "you're going to get us in trouble," Cuomo replied, "I don't care," and slammed the door shut, according to her account. Commisso said Cuomo slid his hand up her blouse and grabbed her breast.

Cuomo has adamantly denied groping her, saying once, "I would have to lose my mind to do such a thing."

The Associated Press doesn't usually identify alleged sexual assault victims unless they decide to tell their stories publicly, as Commisso has done in newspaper and television interviews.

Commisso filed a complaint with the county sheriff in August in the same week a report from state Attorney General Letitia James concluded the Democratic governor sexually harassed 11 women and worked to retaliate against one of his accusers. Other accusations outlined in the report range from planting unwanted kisses to asking unwelcome personal questions about sex and dating.

Cuomo announced his resignation a week after the release of the blistering report, marking a dramatic downfall for the third-term governor who had been seen as a beacon of sturdy competence during his daily COVID-19 briefings in 2020.

Commisso was referred to as "Executive Assistant #1" in the report but publicly revealed her identity after its release. She is the only woman mentioned in the attorney general's report known to have filed a criminal complaint.

District attorneys in Oswego, Manhattan, suburban Westchester and Nassau counties also had said they asked for investigative materials from the attorney general's inquiry to see if any of the allegations could result in criminal charges.

Also, the Assembly Judiciary Committee is completing a wide-ranging impeachment investigation of Cuomo that began before he resigned. The also were looking at the administration's handling of COVID-19 data and efforts to rush COVID-19 testing for Cuomo's inner circle in spring 2020.