Criminal Charges Could Be Filed Against Michael Cohen Very Soon 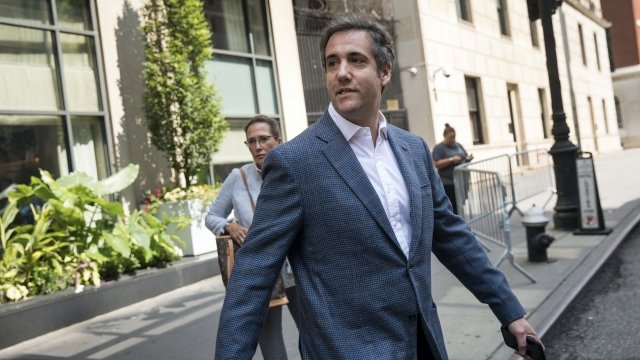 SMS
Criminal Charges Could Be Filed Against Michael Cohen Very Soon
By Katherine Biek
By Katherine Biek
August 20, 2018
Investigators are looking into more than $20 million in loans received by a taxi business Cohen and his family own.
SHOW TRANSCRIPT

Sources told CNN that criminal charges against Michael Cohen could be announced before September.

The FBI raided the home, office and hotel room of President Trump's former personal lawyer back in April and seized millions of files. Cohen's under criminal investigation for his business dealings.

The New York Times reported Sunday that potential charges could come from the more than $20 million in bank loans obtained by a taxi business Cohen and his family own.

Investigators are reportedly looking into whether Cohen misrepresented the value of his holdings to secure the loans and whether he failed to report any income to the IRS.

The Times report also said authorities are determining whether Cohen broke any laws by arranging payments to women who claimed to have had affairs with Trump.

Federal officials, Cohen and his legal team all refused to comment on the Times report. Cohen previously told ABC he'll defer to his lawyer if federal prosecutors charge him with anything.