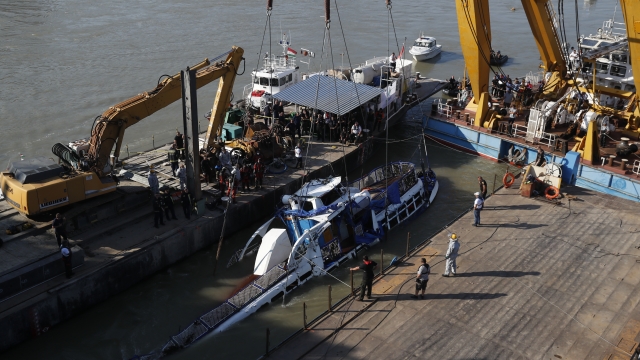 Officials say 35 people were on board the sightseeing boat when it collided with a larger vessel on May 29. It sank to the bottom of the Danube River.

Crews have recovered the bodies of at least four more people who died after a sightseeing boat capsized and sank on the Danube River in Budapest late last month.

The bodies were found inside the wreckage when salvage crews began lifting the boat out of the water on Tuesday.

As Newsy previously reported, there were 35 people on board the boat when it collided with a larger vessel during a rainstorm on May 29. Thirty-three South Korean passengers were on a tour of the river with two Hungarian crew members.

Rescuers managed to save seven people after the crash and 20 others had previously been confirmed dead. Prior to Tuesday, officials were having a difficult time continuing the search for the eight people still missing because of the Danube's high water levels and fast current.

Hungarian police have already launched a criminal investigation into the collision. Officers will reportedly examine the wreckage once its fully out of the water and taken to a secure location.

The captain of the other ship in the collision has been under arrest since the beginning of June.