Crews Prepare For Another Heat Wave In The West 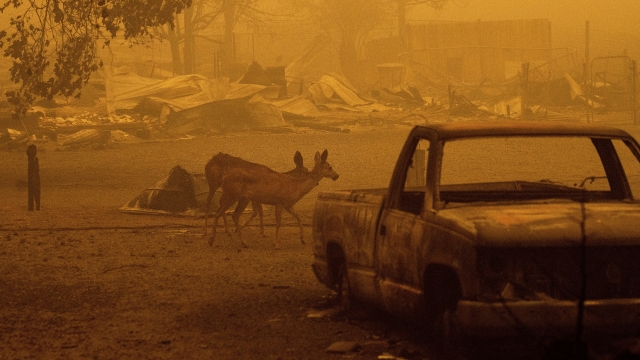 SMS
Crews Prepare For Another Heat Wave In The West
By Robin Dich
By Robin Dich
August 9, 2021
Red flag warnings have been issued from the northwest to the northern Rockies.
SHOW TRANSCRIPT

Firefighters are bracing for another heat wave this week out west.

There are more than 100 large wildfires burning nearly 2.3 million acres of land in the region.

The National Weather Service says there are widespread air quality alerts and red flag warnings that will stretch from the northwest to the northern Rockies.

That could mean trouble for California. The Dixie fire is now the second largest wildfire in state history. The fire is nearing 500,000 acres and nearly 40 percent of Plumas County is under evacuation orders.

As of yesterday, no deaths had been reported, but the local county sheriff's office said four people are unaccounted for.

Since it erupted in early July, it has destroyed hundreds of buildings.

The smoke from wildfires continue to flow into parts of Colorado and Utah where the air quality in many areas was rated as unhealthy. For several hours on Saturday, Denver had the worst air quality for any city in the world.

The National Weather Service believes the thick smoke will continue for the next couple of days, but predicts it will decrease by the end of the week.