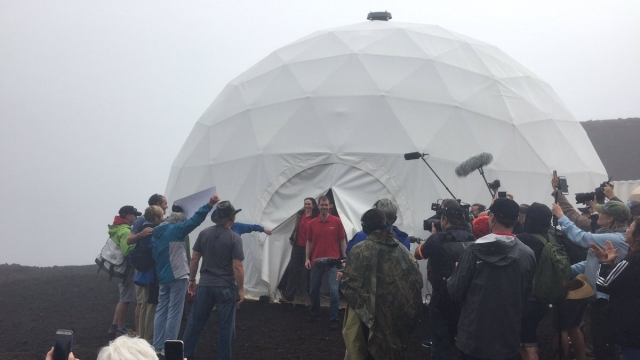 By Stephanie Liebergen
August 28, 2016
The crew lived in total isolation on the Mauna Loa volcano in Hawaii.
SHOW TRANSCRIPT

Six people returned to Earth after a year on Mars ... kind of.

The six crew members of the Hawaii Space Exploration Analog and Simulation program, or HI-SEAS, spent the past year living in total isolation on the Mauna Loa volcano in Hawaii.

The crew members lived inside a 1,200-square-foot dome and donned simulated space suits anytime they left the dome for outside research. Their communication with the mission support team was designed with a 20-minute delay to simulate the delay that would come with actually being on Mars.

The primary goal of the year-long mission was to study the behavioral effects of being disconnected from Earth.

The HI-SEAS crew's architect said, "The UH research going on up here is just super vital when it comes to picking crews, figuring out how people are going to actually work on different kinds of missions."

This is the fourth and longest HI-SEAS mission. The next two missions are scheduled for 2017 and 2018, and each one will be eight months long.