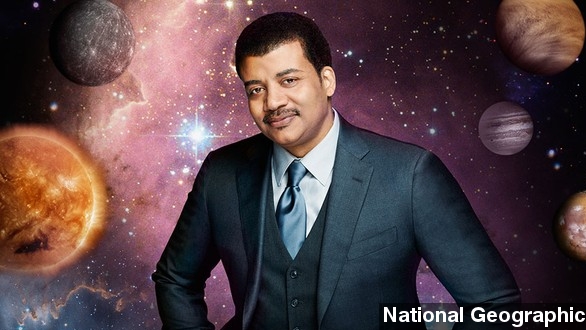 National Geographic's new series, Cosmos: A Space Odyssey, reportedly made television history as the largest global rollout of a TV series ever.

According to National Geographic, the show aired on 220 channels, in 181 countries  in 45 different languages.

But some creationists believe the show lacks balance because it doesn't offer equal airtime to religious fundamentalists.

"Do they ever give a creationist anytime?"

"Creationists aren’t even on the radar screen for them, they wouldn’t even consider us plausible at all." (Via The Janet Mefferd Show)

That was Danny Faulkner of creationist group Answers in Genesis, and he argues that creationists deserve time on the new show. (Via YouTube / Creation Training Initiative)

Answers in Genesis is the same group that help put together the creationist versus evolution debate between Ken Ham and Bill Nye the Science Guy.

But it seems Tyson has addressed this issue more than once already. Before the show aired he said this on CNN,

"You don’t talk about the spherical Earth with NASA, and then say let’s give equal time to the flat Earthers ...the good thing about science is that it’s true whether or not you believe in it."

He also appeared on Late Night with Seth Meyers where he addressed Creationism again.

"If you don’t know science in the 21st century, just move back to the cave because that’s where we’re going to leave you as we move forward."

Despite the criticism the show seems to be a success. According to Deadline, the premiere drew 5.8 million viewers and is expecting even higher ratings in the future.

Cosmos is a reboot of the 1980 television series of the same name hosted by the late Carl Sagan.