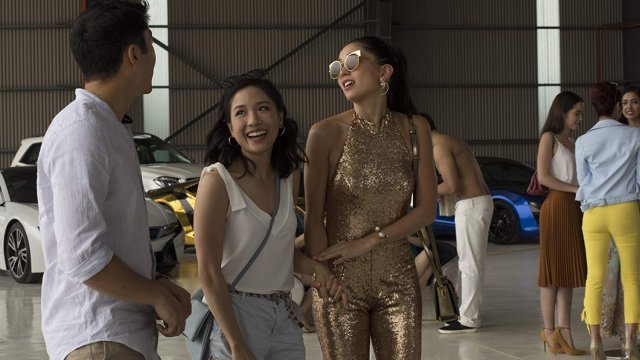 SMS
'Crazy Rich Asians' Beats Expectations And Makes Box-Office History
By Jamal Andress
By Jamal Andress
August 19, 2018
It's been 25 years since an all-Asian cast took the silver screen in a nationwide release, and that's not the only history that was made this weekend.
SHOW TRANSCRIPT

Taking the No. 1 spot this weekend and making some box-office history is "Crazy Rich Asians," bringing in an estimated $25 million in its debut weekend. This highly anticipated romantic comedy actually opened in theaters on Wednesday, putting the five-day box-office total closer to $34 million. Either way, this film exceeded expectations.

But the box office-numbers are in many ways the least important part of this debut. It's been 25 years since a predominantly Asian cast took the silver screen in a nationwide release. "The Joy Luck Club" debuted in 1993 and ultimately made $33 million at the box office.

"Crazy Rich Asians," on the other hand, has already made $34 million in its first five days. Couple that with an extremely reasonable production budget and rave reviews from the film nerds and you get a very successful film — with the potential for multiple sequels.

And just in case you missed it, both of those films feature a diverse ensemble cast. Hollywood, there may be a pattern here.

Last but not least this week is Marky Mark in "Mile 22," bringing in an estimated $13.6 million in its debut weekend. That's a smaller debut than analysts expected, but probably what this film deserves.

"Mile 22" managed a particularly awful 20 percent on the Tomatometer and inspired headlines like, "'Mile 22' Manages to Fail on Every Front." So needless to say, maybe wait until this one heads to DVD.

As for next week, Melissa McCarthy ruins "Sesame Street" for us all.