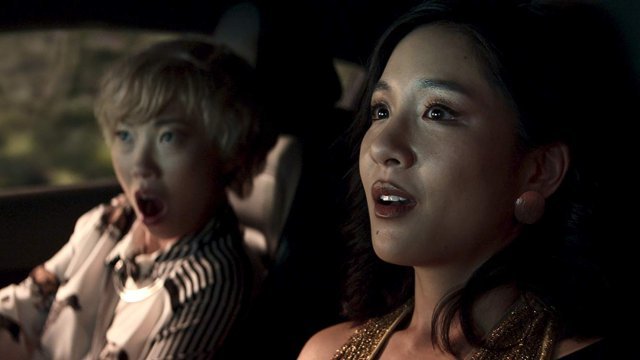 But what's even more impressive is the extraordinarily small drop in ticket sales from last weekend to now.

In its debut last week, "Crazy Rich Asians" made $26 million in domestic theaters. This weekend it pulled in $25 million — that's a 6 percent drop in ticket sales, which is unheard of.

That's the smallest drop from debut to sophomore weekend this year.

Staying in the No. 2 spot this week is Jason Statham's "The Meg," bringing in an estimated $13 million in its third week out. That helps the push the domestic total for this shark flick to $105 million and the worldwide total past $400 million.

Taking third place this week and giving a whole new meaning to the phrase "Tickle Me Elmo" is "The Happytime Murders," bringing in an estimated $10 million in its debut weekend.

That's by far the lowest debut of Melissa McCarthy's solo film projects and probably the only one that came with a lawsuit from a puppet show.

For all the trouble "The Happytime Murders" went through to get this film in theaters, you would think they'd go ahead and make a decent movie — but alas, dreams don't always come true.

"The Happytime Murders" sits at a dismal 22 percent on the Tomatometer and shows no signs of getting any better. So if you're in a Melissa McCarthy kind of mood, I believe "The Heat" is streaming online.

As for next week, Oscar Isaac joins a long tradition of Hollywood stars and makes his World War II movie.