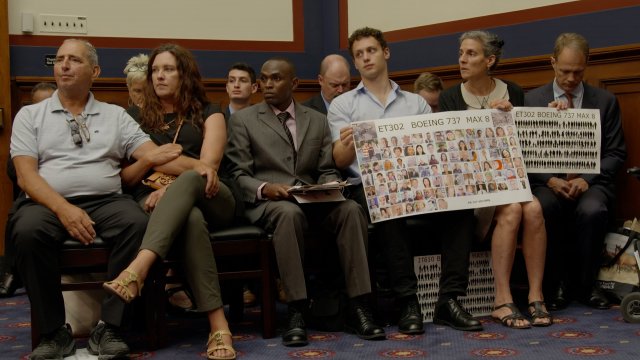 SMS
Plane Crash Victims' Families Demand Changes For Boeing 737 MAX
By Alexandra Miller
By Alexandra Miller
July 17, 2019
At least one member of Congress appears to be on board with the families' demands for improved simulator training.
SHOW TRANSCRIPT

As Paul Njoroge recounted the deaths of his wife, three children and mother-in-law, the pain was palpable.

"My wife and my mom-in-law knew they were going to die. They had to somehow comfort the children in those final moments knowing they were all their last. I wish I was there with them. It never leaves me that my family's flesh is in Ethiopia mixed in the soil, jet fuel and pieces of the aircraft," he said.

Njoroge, Michael Stumo and hundreds of others lost loved ones in Boeing 737 MAX crashes. And Wednesday, the two men asked Congress to take action to make the next-generation planes safer.

Among the demands: a certification of the plane as a new plane. The families say it's too different from the original 737, which was designed during the Vietnam War. They're also demanding the FAA require simulator training, not just on a tablet device like it is now.

Democratic Congresswoman Stacey Plaskett, who sits on the House transportation committee, agrees with the simulator requirement.

The families say Boeing still has not reached out to them personally. They're not only calling this a lack of empathy, but these families say their loved ones' safety may have been secondary to profit.

Boeing says the 737 MAX is its best-selling plane ever. Or at least it was before being indefinitely grounded worldwide. At the time the planes stopped flying last March, 4,600 were on order, worth more than half a trillion dollars. Boeing marketed the planes as more efficient and with more passenger capacity, all without needing pilots to be retrained.

Njoroge says the bottom line shouldn't be profit, it should be people.