Cranberries Are Ready For Harvest In The Cheesehead State 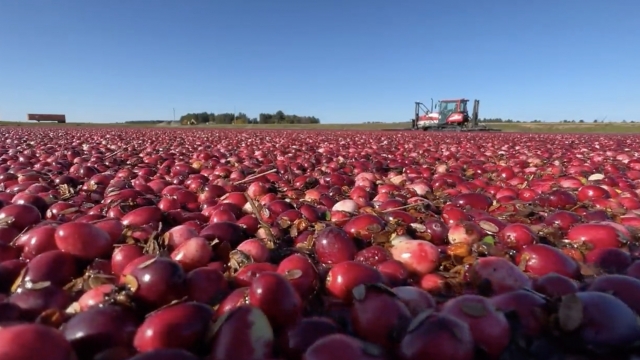 Wisconsin produces more cranberries than any other state in the country, and one farm there is ready for a fall harvest after a hard run last year.

Wisconsin is running red, and it's not because of its fall leaves or its college teams.

It's cranberry season, and farmers across the state are working to harvest the berry from their flooded marshes.

For almost 120 years, Nodji Van Wychen and her family have been running Wetherby's Cranberry Company in Warrens, Wisconsin.

"The marsh was started in 1903," Van Wychen said. "We first started packing fresh fruit in 1905, so I am third generation on the marsh. My grandfather was the one who actually designed, created and built the entire marsh at that particular time. When he retired in 1957, it was only 20 acres compared to the 200 acres of planted vines that we have now."

It's a crop with deep family ties — with four children, 10 grandchildren and one great granddaughter — and even deeper roots in the state.

"[It's] the No. 1 fruit crop in the state of Wisconsin, and we have been the No. 1 crop for 28 consecutive years," Van Wychen said. "We produce actually 68% of the nation's crop in Wisconsin with only 250 growers, so I think we do a pretty awesome job."

The Cheesehead State is well ahead of states like Massachusetts and New Jersey that tend to be more famous for the fruit. According to the U.S. Cranberry Marketing Committee, U.S. growers are estimated to produce more than 8.3 million barrels in 2022.

Fall is here and the pumpkin pie spice trend is once again taking over. But why is this season so popular?

"We measure our yield in barrels, which is the old standard weight, and 100 pounds equals a barrel," Van Wychen said. "Wisconsin alone is estimated to produce 5.2 million barrels of cranberries this year, which will be expected to be a good crop."

That's a relief after what happened in 2021.

"Last year due to inclement weather during the blossom time, the state was down 30% on their cranberry crop, so we're really pleased this year to be back up where we should be servicing all the public with our special fruit," Van Wychen said.

Planted as vine cuttings from previous harvests in beds of peat and sand, cranberry vines take four to five years to mature. Once ready to harvest, the beds are flooded with water so that machines can easily knock the berries off the vines.

After being collected from the water, the cranberries are sorted, with some bound for the market, just as they are. However, the majority are turned into other products, like juice, relish and even wine.

"There's not a lot of cranberries growing all over the nation," Van Wychen said. "Therefore, you get to this cranberry region, and people just really like the cranberry wine because it's so unique and different."

Regardless of how one chooses to enjoy them, Van Wychen says she hopes people at least give them a try.

"We are very fortunate that cranberries are very healthy to the consumer, and consumers are being very health conscious nowadays," Van Wychen said. "If you aren't using them year-round, at least have cranberries on your Thanksgiving table."