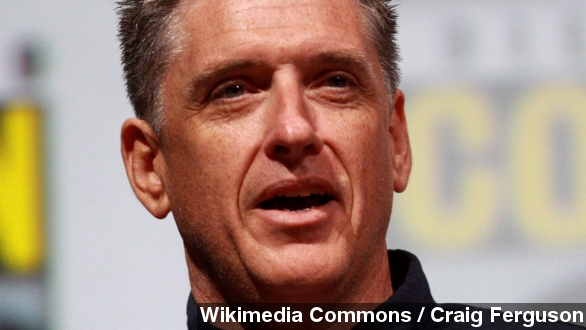 By Zach Toombs
April 28, 2014
The Scottish comedian said Monday he would leave CBS in December, shortly before David Letterman hands off "The Late Show" to Stephen Colbert.
SHOW TRANSCRIPT

Yet another late show host is on his way out.

Craig Ferguson of CBS's "The Late Late Show" said Monday he'll be leaving in December. He announced the news during the 5:30 filming of his show in Los Angeles.

In a statement, he threw in a jab at Chris Martin's and Gwyneth Paltrow's recent breakup. "CBS and I are not getting divorced, we are 'consciously uncoupling,' but we will still spend holidays together and share custody of the fake horse and robot skeleton, both of whom we love very much." (Via Wikimedia Commons / Gage Skidmore)

Ferguson's other projects include hosting the Celebrity Name Game show, set to premiere this fall through syndication. (Via The Hollywood Reporter)

This means Ferguson will be out shortly before his CBS lead-in David Letterman hands off "The Late Show" to Stephen Colbert in 2015. That was just announced April 3. (Via Comedy Central)

With the new faces over at NBC, Ferguson's departure at CBS means the two networks will have replaced all four of their late night hosts within a two-year span.

The 51-year-old Ferguson has hosted "The Late Late Show" since 2005. The Scottish comedian's contract actually stipulated that he replace Letterman or receive a multi-million-dollar payout. CBS obviously opted for the latter.