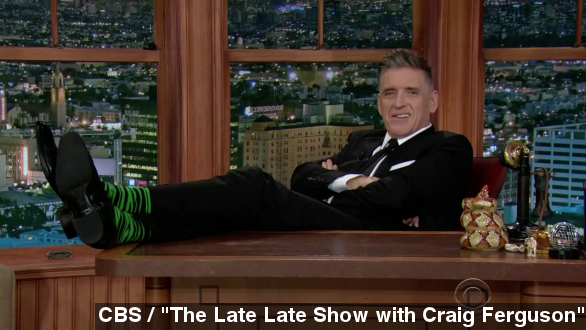 Craig Ferguson of CBS's "Late Late Show" aired his final episode on Friday. Here's what he had to say about the end of his 10-year stint.

"Maybe 'Art' is a very grand word, but what I think I was trying to do here, and think we managed to do here, is make something that wasn't here before..." Ferguson said.

While Stephen Colbert may have stolen the spotlight this week with his send-off of “The Colbert Report" Thursday, Ferguson had his own lineup of finale-type skits.

After a star-studded musical intro and an interview with Jay Leno, Ferguson signed off by unmasking the identity of his Secretariat co-horse. Her identity? None other than Bob Newhart telling him he’s been in a dream this whole time.

Queue “Bob Newhart Show”-esque dream sequence — though in this case it’s not Bob Newhart waking up to his wife but Ferguson waking up next to Drew Carey.

Craig Ferguson as Mr. Wick talking to Drew Carey, "I was the host a of a late night talk show."

Ferguson made a name for himself on "The Drew Carey Show," playing Carey’s boisterous boss, Mr. Wick.

Not long after, he moved to the “Late Late Show," replacing Craig Kilborn in 2005. And to some, he was made for the gig.

A writer at The Washington Post says Ferguson was “spot-on funny, flirty, hyper and, thanks to his mesmerizing Scottish accent, appreciably foreign. He was as good at listening as he was good at riffing. That’s really all you need.”

After doing just over 2,000 episodes, Ferguson told the audience that while he was done with late night TV, he wasn't retiring.

He gave no specifics but said to stay tuned. British actor-comedian James Corden will take over the “Late Late Show” on March 23.