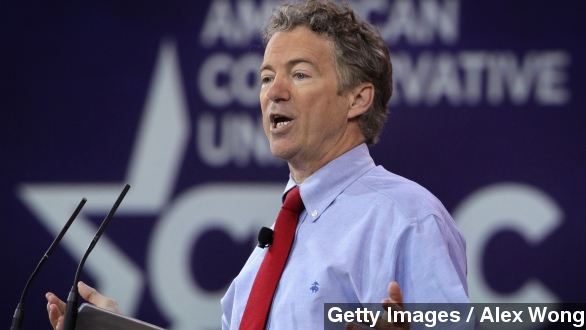 SMS
CPAC 2015: Paul Wins Straw Poll, Bush Struggles
By Kate Grumke
By Kate Grumke
February 28, 2015
For the third year in a row, Rand Paul won CPAC's straw poll, seen as a way to take the temperature of the GOP's conservative base.
SHOW TRANSCRIPT

For the third year in a row, Kentucky Senator Rand Paul has won the Conservative Political Action Conference's straw poll.

The poll is seen as an early way for the GOP to feel out how Presidential hopefuls will do with the conservative base, but it far from guarantees a GOP candidacy.

Following the news, Paul tweeted, "I plan on doing my part to continue making the GOP a bigger, bolder party. Thanks, #cpac2015!"

Paul won with a little more than a quarter of the vote, and Wisconsin Governor Scott Walker was a strong second with 21.4%.

But the Los Angeles Times reports Walker may have been the real winner of the event, writing, "[he] brought the audience to its feet with an animated speech full of red meat."

Former Florida Governor Jeb Bush didn't do so great. He's reportedly blowing the other candidates away as far as fundraising, but he came in fifth in this poll — with just 8%.

Conservative talk show host Sean Hannity didn't go easy on Bush during a Q & A at the conference. He grilled Bush on his stances on Common Core and immigration.

Bush's poor performance isn't exactly surprising; he's seen as one of the more moderate 2016 hopefuls, and CPAC's attendees are the grassroots of the party — often leaning starkly to the right and libertarian.

That libertarian lead could explain Paul's strong showing. As POLITICO writes, "It's still Rand Paul's CPAC. Whether it can be Rand Paul's Republican Party is another question."