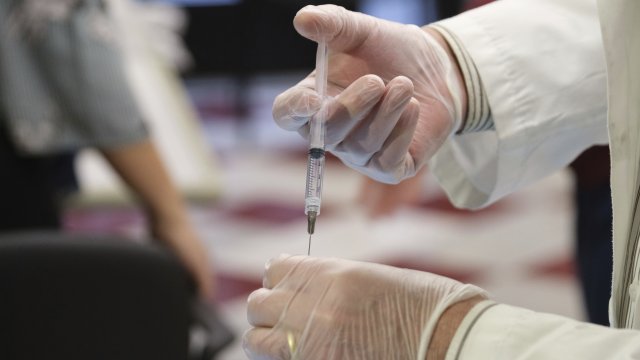 SMS
COVID Vaccine Scheduling Struggles
By Lindsey Theis
By Lindsey Theis
January 15, 2021
The demand is high for a COVID vaccine, and the logistics behind getting a coveted appointment is leaving many frustrated and empty handed.
SHOW TRANSCRIPT

The demand is high for a COVID vaccine, and the logistics behind getting a coveted appointment are leaving many frustrated and empty-handed.

"Every time we picked a location, there was no appointments available at any location," Anna Duncan told Newsy.

Duncan and her sister each spent four hours trying to get a vaccine appointment for their 91-year-old mother, who lives in Washington, D.C., with no luck.

"I happened to be in Florida, and my sister's in Arlington, Virginia. My sister and I each saw one appointment and we immediately grabbed it. But by the time we had entered the capture code, it said, sorry, that appointment's no longer available."

"They're telling us just go on the website and get it and you go there, it's a real chore to find something. I wound up having to go to a location which is about 45 miles away," Henry Wall, 77, in Arizona said.

"The last time we called, they put us on a waiting list. I haven't heard anything from the waiting list. Plus I called this afternoon and they kept me on hold for 30 minutes," 90-year-old David Terrell in Tennessee said.

A false rumor of available extra vaccine doses had people lining the sidewalks and cars filling the roadways near a New York City vaccine site. The resulting chaos forced police to tell people that it wasn't true and vaccinations were appointment-only.

While millions of doses are getting to the states, a patchwork vaccination approach has led to far less getting into people's arms. Each state, sometimes each county within a state, has a different website or way of signing up. Some sites have even crashed.

"This is one of the hardest tasks that the U.S. government has ever had to deal with," Raphael Lee, administrator at USDR Health Data Program, told Newsy.

Raphael Lee is with a nonpartisan effort that connects volunteer technology teams to governments responding to the COVID-19 crisis. He says we're seeing this rollout signup headache because governments are not always designed to move really quickly.

"Plenty of ordinary people don't have Internet access or they can't use websites, so a complete strategy would actually include non-high-tech solutions, including phone signups and other ways to reach people who really can't get online. And they should also accommodate people who need screen readers and translations into non-English languages," Lee said.

As for Anna Duncan, she's still looking for an appointment slot for her mother, hoping she’ll have better luck.

"We're going to try again on Sunday, Monday, midnight Monday. Monday is a holiday. So maybe we have to try Tuesday. But, yeah," she said.