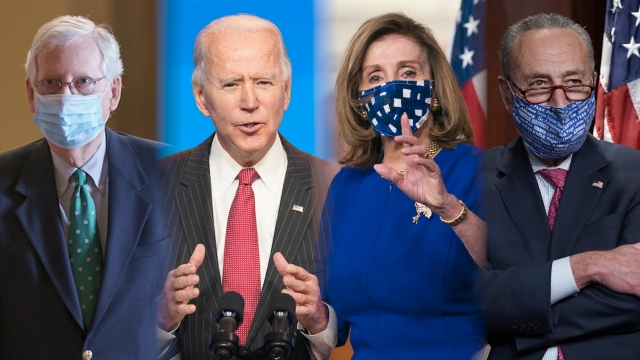 SMS
Time Running Short for New COVID Relief In Congress
By Nathaniel Reed
By Nathaniel Reed
November 26, 2020
Lawmakers adjourned both chambers of Congress for Thanksgiving, leaving millions of Americans with no additional COVID relief before the holidays.
SHOW TRANSCRIPT

Months after key provisions of the government's main coronavirus relief act expired — and with more set to expire at the end of the year — there's nothing to see on Capitol Hill but jet fumes.

Both chambers recessed for the Thanksgiving holiday — and lawmakers have skipped town.

"If there's no further business, I ask that the Senate stands adjourned under the previous order," said Senate Majority Leader Mitch McConnell, addressing a largely empty Senate floor on Wednesday, November 18, over a week before the holiday.

By the time both Houses have returned, it will be December — and COVID relief won't be the only priority. Congress also needs to agree on and pass multiple bills to fund the government, or risk a shutdown.

"The country wants us to come together and get something done to deal with this COVID crisis," said Senate Minority Leader Chuck Schumer.

But, both sides are dug in.

House Democrats have indicated they are hoping to spend at least a trillion dollars more on a package — one that's more comprehensive than what many Senate Republicans want to pass.

"I think we need more [Paycheck Protection Program]. We need money for schools," Republican Senator Lindsey Graham, of South Carolina, told reporters before the Senate recessed last week. "I hope we can get Mitch [McConnell] and Nancy [Pelosi] to go ahead and do a deal that helps us on the PPP front."

If a next-round COVID relief deal isn't reached by the end of December, it'll fall to the next Congress, and likely the incoming Joe Biden Administration.

But the incoming president's administration might not put Americans any closer to getting extra help.

Biden signaled this week he will support Democrats' efforts to pass a big bill — which will continue to stagnate in January if the Senate remains under the control of Republicans and Majority Leader McConnell.