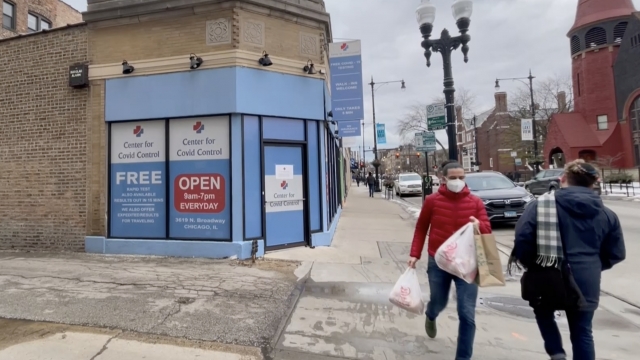 Tina morales worked at the headquarters of the troubled Center for COVID Control in Rolling Meadows, Illinois.

"I was a shift supervisor," she said. "There was a lot that I was doubting just from my very first day."

It was her job to record patient information for COVID-19 tests coming in from the company's 300 pop-up sites nationwide.

As Omicron hit, Morales says the data she was told to put in the system was not always accurate. The Washington state Attorney General says the result was the company overbilling a federal fund for the uninsured.

NEWSY'S PATRICK TERPSTRA: No one ever said, 'This is the government's money. We have to be really careful and make sure all of this is accurate?'

TINA MORALES: In the beginning, yes, like when I first started. But it just became really overwhelming.

Federal records show the lab received over $152 million in reimbursements.

All of it, money approved by Congress to cover COVID tests — only for Americans without health insurance. Providers must confirm a "patient is uninsured" before requesting reimbursement, up to $100 per test.

But in a statement filed as part of a lawsuit brought by Washington state's attorney general, Morales says a manager told her to stop entering insurance information into the data entry system.

"As we started getting backed up with the tests, we were instructed to stop inputting information that we were originally inputting before," she said.

Her declaration says, "The data entry for all incoming patients began to reflect that every patient was uninsured... And that CCC (Center for COVID Control) would submit claims for reimbursement to the federal government."

Morales says they got so overwhelmed, some of the tests expired, allegedly piled, unrefrigerated, in trash bags.

She says her team complied with instructions from a manager to "falsely date late test samples" so they could still be processed by the lab.

Everybody in that entire building knew that any test that was over 72 hours old, there's no rNA to test. It would come back as inconclusive either way.

Another statement filed in court by a second ex-employee says Syed would encourage staff to test their friends and family "even when they didn't need to get tested so that CCC (Center for COVID Control) could get reimbursed" by the government.

Newsy doesn't know whether reimbursements were awarded improperly. The Health Resources and Services Administration doles out the funds.

A spokesman says the agency "takes corrective action against providers who are out of compliance with the terms and conditions of the uninsured program ... Including 'recovery of funds, and providing information to law enforcement when appropriate.'"

Newsy found the Center for COVID Control and Doctors Clinical Laboratory next door, emptied out. It was abruptly shut down after the launch of multiple investigations into widespread reports of wrongdoing.