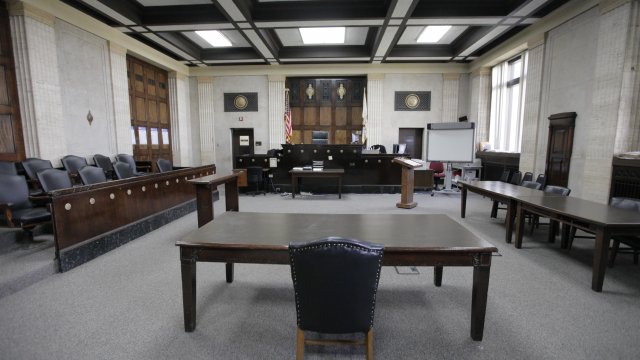 Across the country, criminal courts have either gone virtual, been delayed or stopped indefinitely. Eight states and the district of Columbia have statewide restrictions on jury trials “until further notice.”

And for some of America's busiest courtrooms, the backlog has had severe and wide-ranging consequences.

Crawford says "it was madness" when coronavirus struck and the courts shut down in Chicago.

Crawford's team of lawyers provides free legal defense for young people from the west side of the city facing felony charges.

Said Crawford: “And it's also going to mean that more people are going to plead guilty to things that they shouldn't have pled to."

Crawford said, "I had a young person who's accused of armed robbery and it is a mistaken identity case, for sure. He called me up. Two days ago, his case manager sent me a text and told me he just wants to plead guilty to get this over with … he was like, I just can't do this anymore. I just can't do this. And, and I was like, honey, you gotta hold on, because, you know, we have good motions. And, you know, we could we could win at trial, you just have to hold on, but he's so tired."

It's not uncommon for people accused of crimes to take a plea bargain. The vast majority of criminal convictions are obtained through plea bargains — 97% on the federal level and 94% in state courts.

But for those who do want to fight the cases against them, the pandemic has left their lives entangled with the criminal justice system with no end date.

Pilar Weiss, project director of the National Bail Fund Network says, "If I'm out pretrial, and I'm trying to fight my case and the system is not dismissing cases, it's not dropping cases, it's not closing cases. I am now under surveillance and under the system's watch for some indefinite amount of time."

In Chicago, there are 1,300 more people on electronic monitoring devices this year compared to last year.

And for those unlucky enough to be stuck behind bars in pre-trial detention — they’re facing the very real prospect that they will have served their minimum sentences — before they even get a chance to prove their innocence.