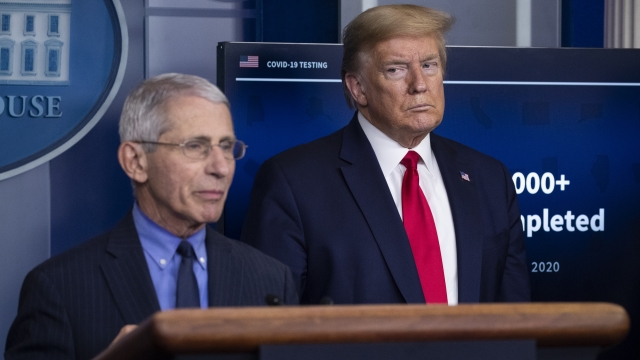 Concern is building as COVID-19 cases surge across the U.S. and as President Trump increases his attacks on the country’s top infectious disease expert.

President Trump's comments alluding to a possible firing of Dr. Anthony Fauci, who has served under six presidents, comes after a recent interview Fauci gave to The Washington Post.

When questioned about handling of the pandemic, Fauci said Joe Biden's campaign "is taking it seriously from a public health perspective," while the perspective of President Trump's campaign is more focused on "the economy and reopening the country."

"We're rounding the turn. They hate when I say it. You know, we're coming up with vaccines, and therapeutics are incredible," President Trump said.

New cases per 100,000 people are growing fastest in Montana, Wyoming, the Dakotas, Nebraska, Iowa and, critically for the election, Wisconsin -- more than 30,000 cases there just in the past week.

Hospital systems like Banner Health in Arizona say they are now bracing  for even more.

"Shows us that November, December and part of January will be difficult times here in the state," Chief Clinical Officer Dr. Marjorie Bessel with Banner Health said.

"We're going to see not just cases continue to escalate, but we're going to see perhaps 2,000 deaths per day two or three weeks from now," Dr. Jonathan Reiner, professor of medicine at the Georgetown University School of Medicine, said.