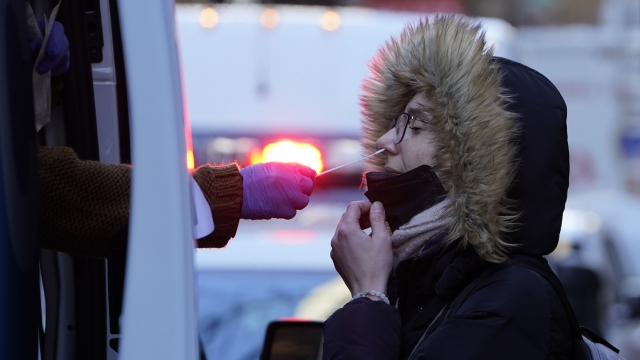 The Omicron variant appears to be slowing in the areas where it first arrived in the U.S.

"I think we are still seeing some of it, but there are signs that it is at least plateauing or slowing down a little bit," Long Island Jewish Forest Hill Hospital's Dr. Armando Castro-Tie said.

In December, COVID-19 cases in New York City grew more than twentyfold. In the past few days, they have flattened.

Castro-Tie says although the numbers are slightly decreasing, New York is still seeing the effects of people getting together during the holidays.

"In early December, our positivity rate was in the 3%-4% range and beginning, sort of mid-to-right-before the holidays. In December, it slowly started climbing and it peaked at about 23% positivity rate," Castro-Tie said. "And we're still in the 20s — in the low 20s — for the seven day rolling average, which is still pretty high."

In Boston, the amount of COVID virus detected in wastewater went down by about 40% since its peak, just after January 1.

Dr. Paul Sax is the clinical director of the division of infectious diseases at Brigham and Women's Hospital.

He said: "I think we can say that it's good news and it's the opposite of what we've been seeing for the previous month or so, when omicron arrived here in the Boston area."

This data has been a leading indicator of case trends in the past.

"It suggests that this particular variant surge may be coming to an end," Sax continued. "Notice I say may, because I've stopped trying to be an absolutist in predicting where this pandemic is going to go. But each time you start to see that decline, you shortly thereafter start to see a decline in cases."

"So I think that we're we're seeing a little bit of a leveling off," Castro-Tie said. "I wouldn't call it on the decline quite yet, and we're certainly seeing that in hospitalizations because that is still high. Patients aren't as sick and they're not as prone to need intensive care unit type care. But the hospitalizations are definitely still going up."

Castro-Tie says it's too early to be confident that the Omicron wave has peaked, even in areas with encouraging data.

Public health officials are looking at what happened in South Africa with Omicron. And whether the U.S. will follow the same model where new daily cases have fallen by about 70% from the mid-December peak.