COVID Around The World: How Omicron Is Impacting The Holidays 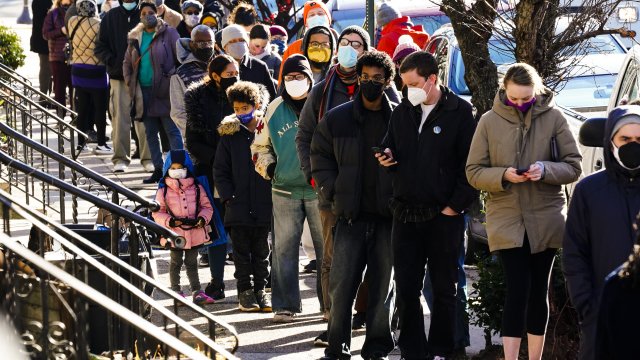 SMS
COVID Around The World: How Omicron Is Impacting The Holidays
By Newsy Staff
By Newsy Staff
December 22, 2021
With variants continuing to spread and Covid surging in many parts of the world, the holiday season is shaping up to be very different than expected.

With new variants continuing to spread and COVID surging in many parts of the world, this holiday season is shaping up to be very different from what we might have expected just a couple months ago.

Travel plans are being changed last minute, popular holiday attractions and events are being canceled, and gifts are shipping later than usual.

Berlin is home to Germany’s famous Christmas markets, which now have strict rules. Patrons have to wear a mask and show if they are either vaccinated or have previously been infected to get in.

It's a small price to pay for visitors, as last year the markets were canceled completely. But there is one big group missing according to market stall owners — Americans.

Around two million Americans visit Germany every year, and over the winter, these markets are one of the big draws. But with the CDC advising against travel to Germany right now because of COVID-19, those travel numbers are very different. Market stall owners say they're hoping next year they can see the return of American friends.

The mayor originally said he had doubts but concluded events should go ahead as planned, since the virus is more difficult to catch outdoors than indoors.

This year, 47% of Muscovites are vaccinated, and the number of cases of infection have been solidly on the decline since November.

Last year no one was vaccinated, and case numbers were on the up, meaning the traditional "Journey to Christmas" celebrations were canceled, and only ice rinks stayed open.

Now 30 cases of the Omicron variant have been detected in Russia, and that’s not yet translated into faster rates of infection.

This year, almost all events are taking place, but masks are mandatory in enclosed public spaces and proof of COVID-19 vaccination or recovery are required to enter museums and galleries.

Unlike last year there are no restrictions on movement within Russia, and few restrictions on entry from outside the country, with more people going abroad this year, too.

Tanzania has seemed relatively unscathed since the start of the pandemic.

As an increasing number of countries around the world are detecting cases of the new variant, Omicron, the government there says it is monitoring the situation closely.

There have been reports of an increase in citizens getting flu-like symptoms, high fever, headaches, and back pains — something the government says is just the seasonal flu due to weather changes, not COVID.

Only 2% of Tanzanians are vaccinated, so the government is urging caution during the holiday season — wearing masks, washing hands and avoiding large groups.

Being a tourist destination, visitors from Europe, the U.S. and Asia are coming in, but they're required to have a negative COVID test and be vaccinated.

Unlike 2020 where Tanzania did not have a vaccine campaign, this end of year offers more peace of mind for citizens knowing vaccines are available.

According to official figures, Tanzania has had around 26,000 infections and 734 coronavirus-related deaths reported in the country since the COVID-19 pandemic began.

In India, the COVID crisis had largely eased since the deadly surge there last summer.

New Delhi has Christmas decorations out, but the festive cheer is missing. India's capital city is gearing up for what will be another year of muted festivities, despite a record drop in daily infections spooked by the outbreak in Europe.

The Indian government says all residents must avoid non-essential travel, mass gatherings and ensure that any festivities that take place over the next two weeks are low intensity.

All restaurants, bars and pubs in Delhi can only operate at half capacity, and all large gatherings, except for weddings, have been banned. Officials are patrolling markets, where they conduct random COVID-19 tests.

The Indian government says a lot is at stake because if what's happened in Europe happens there, given India's high population density, the country could see nearly 1.4 million cases every day.