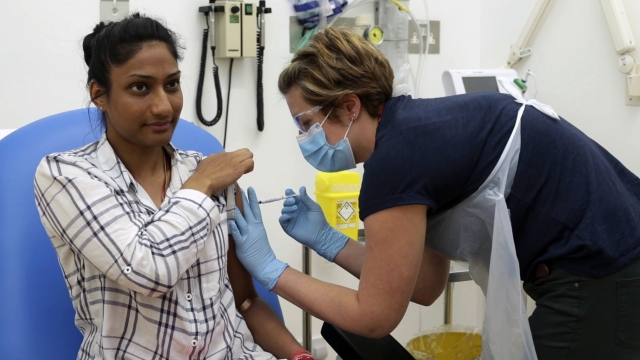 According to the World Health Organization, several potential vaccines are already in clinical trials.

“We are very confident that we are going to have a vaccine by the end of the year.”

Operation Warp Speed is a government-funded program working with the private sector to fast-track the development and distribution of a vaccine and have 300 million doses ready by early next year.

“We’re building supply lines now, and we don’t even have the final vaccine.”

The White House didn’t return our request for more information about which vaccines are being considered, but according to the World Health Organization, several are already in clinical trials.

They don’t all stop the disease the same way. Two potential vaccines, one from CanSino Biological in China and another from Oxford University, use the viral vector platform.

“You take another virus that's less harmful. In this case, I believe there's an adenovirus-based vaccine that is in trials right now. That's developed, I think, by the University of Oxford, and that takes that other virus, puts the the protein from SARS Coronavirus 2 in that virus. You get infected with that virus and it replicates, but it doesn't make you sick.”

Instead, it would theoretically create a protein the body needs to fight COVID-19.

A potential vaccine from Sinovac and one from the Wuhan Institute of Biological Products use the inactivated method.

“An inactivated vaccine, similar to what the influenza vaccine is, the flu shot, is actually the virus, and it's been inactivated, it's been rendered noninfectious. Usually that's by treating it with formaldehyde or some other chemical that keeps the virus particle intact physically, but prevents it from being able to cause an infection.”

A vaccine by Moderna, funded by the National Institute of Allergy and Infectious Diseases, uses something that’s never been successfully implemented: the mRNA platform.

“The mRNA vaccine, which was the first one, I believe, in clinical trials, has a piece of RNA, which has genetic material that encodes the spike protein on the outside of the virus. So you're not getting the virus, you're getting a piece of genetic code that will instruct your body to make that protein from the virus. Your body will then recognize that protein is foreign and develop antibodies and mount an immune response against it.”

While there are several vaccine possibilities for the White House to consider, the president pointed to Johnson and Johnson's work specifically.

“Johnson and Johnson is doing it. Many companies are, I think close.”

Johnson and Johnson’s Janssen Pharmaceuticals Companies is working with the U.S. Department of Health and Human Services. It says it has a potential candidate, along with two backup vaccines.

But it won’t be ready for Phase I clinical trials until September, and manufacturing one billion doses of it would take until the end of 2021.

Oxford University seems to be ahead of the pack, mainly because it got a jump start with a vaccine for Middle East Respiratory Syndrome, a member of the coronavirus family. But experts say development of a vaccine just takes time.

“The reason why it takes so long for modern vaccines to be developed, is that before we even get to the point of testing them in humans, we test them extensively in animals to make sure that both they're likely to be safe in humans, and that they actually work.”