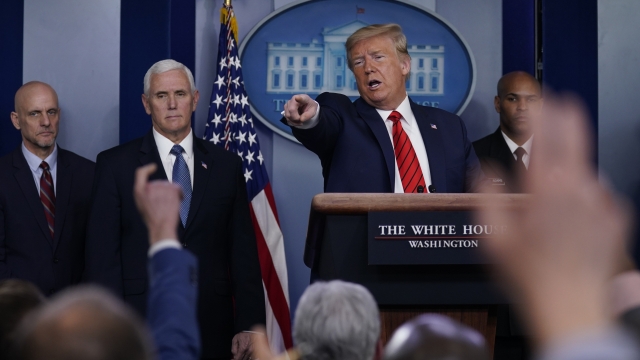 SMS
COVID-19 Treatment Touted By Trump Leads To Misleading Info Online
By Tyler Adkisson
By Tyler Adkisson
March 24, 2020
The president's comments on chloroquine have prompted some to self-medicate with the substance. That's led overdoses and at least one US death.
SHOW TRANSCRIPT

"We are very excited about, specifically, what we talked about with the chloroquine. I think it could be something really incredible [...] I would have to think that it could have a very positive effect or a positive effect, maybe not very, but maybe positive."

In recent White House briefings, President Donald Trump has touted antimalarial drugs chloroquine and hydroxychloroquine as possible COVID-19 treatments — despite cautions from health experts who say there's no hard evidence of their efficacy at managing the disease. Trump also made similar statements on social media, which has added to the infodemic surrounding coronavirus.

Chloroquine misinformation has contributed to one death in Arizona. In that instance, a man and his wife reportedly drank a small amount of the substance to prevent the disease after watching Trump's briefings and reading misinformation about it as a treatment online. The woman told an NBC News reporter they felt safe taking it because "Trump kept saying it was basically pretty much a cure."

Nigerian health officials also reported three cases of chloroquine overdoses after Trump's statements began trending on social media so quickly that people ran out to stockpile the drug. That, in turn, led health officials to issue warnings about mass consumption of the drug.

Paul Barrett, deputy director of New York University's Stern Center for Business and Human Rights and author of several studies on disinformation, told Newsy that unproven cures or treatments are among the most concerning types of misinformation, and that social media companies hold responsibility to remove that content.

"At the top of the list has to be things that immediately imperil people — either by convincing them that something could prevent the disease or cure the disease and that would therefore cause people to be less on their guard about potentially contracting the disease. So, material that says pill XYZ is a cure to the coronavirus when we know that pill XYZ is not — needs to be taken away forthwith."