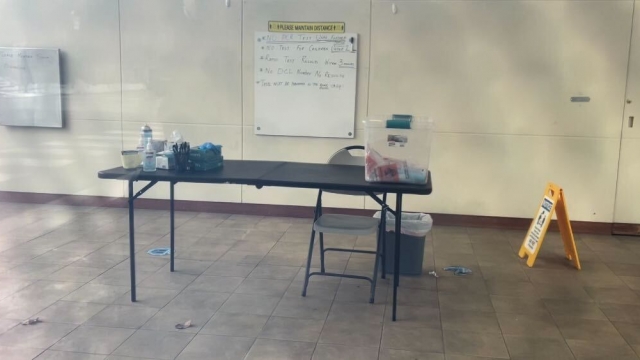 The owner of two ax-throwing lounges took a big swing at a new business with her husband, opening pop-up COVID testing sites all over the country.

The Center for COVID Control would help bring in eye-popping sums of government reimbursement before complaints would lead the start-up to shut down. Their story and Newsy's investigation exposes loose rules in laws meant to keep medical testing safe and reliable. It was an invitation to offer lab tests for lots of money and little oversight.

In December 2021, Omicron began sweeping the country. Chicago resident Exavier Pope went to get a COVID test at a place that appeared one day under his apartment.

"I mean it looked like a place that you would go get tested," Pope said. "It said 'Center for COVID Control.' It has a logo on it."

The Center for COVID Control opened around 300 pop-up sites all over America.

Before the pandemic, Siyaj had much smaller businesses — two lounges where, for $30, you can throw axes for an hour.

To encourage people to get tested for the coronavirus, the U.S. government made it cheap and easy for labs to test for COVID-19, promising to cover the cost of tests for the uninsured up to $100 each. So far, about 10 billion tax dollars have gone toward reimbursing labs.

Many of them were well-known labs working with familiar pharmacies. Others were linked to businesses set up in vacant storefronts, even cargo containers.

The Center for COVID Control and its affiliated lab, Doctors Clinical Laboratory, ran thousands of PCR tests every day, getting reimbursed $152 million from the government.

An employee, in a now deleted Facebook video, suggested the company seemed to be doing rather well.

Aleya Siyaj bought a stately home with a private drive, river views, and fountain out front.

But as demand for COVID testing surged during Omicron, so did reports of problems.

"It looked like they were trying to manage chaos," Pope said. "The employees that were in there didn't have gloves on ... There was debris on the table, empty packages from tests, napkins."

A federal audit in December listed pages of "deficiencies" — findings of an insufficient number of laboratory personnel, a lack of freezers cold enough to store samples, delayed test results and failure to ensure patient confidentiality.

Newsy went to Chicago to piece together how two people with no obvious health care experience could become COVID testing tycoons.

Their key to unlocking a fortune was pairing up with a federally licensed lab overseen by a certified director. Doctors Clinical Laboratory processed samples from the Center for COVID Control. Lines between the two companies are blurry at best.

Public records show both businesses were located in the same office complex in Rolling Meadows, Illinois, outside Chicago.

The offices are now empty and abandoned. Newsy found what appear to be testing supplies in the trash out back, coated in snow. Leaning on the front door, important, uncollected mail.

The attorney general of Washington has opened up an investigation and is suing Doctors Clinical Laboratory. That lawsuit alleges the lab had garbage bags full of samples left out for more than a week, reported false negative results, "frequently failed to report any test results at all," and "misrepresented to the federal government that consumers with insurance were actually uninsured," making the lab eligible for more reimbursement.

They're all stunning accusations against a lab licensed by the government, with a lab director responsible for supervising testing.

"The lab director, essentially — to use the analogy — they're the captain of the ship," said Dr. Eric Blank, with the Association of Public Health Laboratories.

Newsy learned the lab had two directors this past year at different times. Both had limits on how much attention they could give Doctors Clinical Laboratory, as it morphed into a COVID testing powerhouse. The most recent lab director has never been publicly revealed until now.

On LinkedIn, he lists experience as an "off-site laboratory director." And he does live "off site" five hours away in Ballwin, Missouri, outside St. Louis. It's a long distance for someone who's supposed to supervise a massive testing operation.

"If you are really going to be the captain of the ship, you have to kind of know what's going on and you can't really do that if you are far removed from that laboratory," Blank said.

Alak's also a busy guy, overseeing four other labs at the same time.

The federal "Clinical Laboratory Improvement Amendments" known as CLIA, allow a lab director to be based remotely and oversee up to five labs. It's a rule designed with smaller places in mind.

Instead, Alak was overseeing a lab planning to offer more than a million COVID tests.

What does he know about the trouble at the lab he oversaw?

In a text he told us, "I am sorry I can not help you as I was there only for a brief period."

It's not clear if and when Alak left Doctors Clinical Laboratory, or if the lab exists in any form today.

Before November, there was a different lab director. Documents show, like Alak, he too was supervising four other labs at the same time.

This isn't the first story to suggest rules may be too lax for lab directors.

Congress and the U.S. Center for Medicare and Medicaid services, CMS, set those standards.

CMS told Newsy lab directors can work remotely so long as they are "accessible to the laboratory to provide onsite, telephone, or electronic consultation," and that: "the laboratory directors of all CLIA laboratories are responsible for ensuring compliance with the CLIA regulations regardless of their location."

CLIA regulations — established decades ago — say nothing about those pop-up sites where specimens are collected.

"Back in the '90s ... a point-of-care rapid test would probably be unimaginable because we didn't have that kind of technology," Blank said.

The Illinois Department of Public Health told Newsy while it has power to regulate labs, that's not the case for pop-up sites, considered private businesses.

With their headquarters cleared out and Newsy's many emails and phone calls ignored, reporter Patrick Terpstra walked up the winding driveway to Aleya Siyaj's sprawling new home an hour outside Chicago. Someone came to the door and saw Terpstra, then immediately turned and walked away.

The Center for COVID Control quickly shuttered all of its locations shortly after the new year.

An attorney representing the company in a Minnesota lawsuit told Newsy: "While it was operating, Center for COVID Control was committed to delivering resources to patients in an accurate and compliant manner, and provided valuable and much needed services to the best of its ability in an extremely challenging environment."

It has not announced any plans to tighten rules for lab directors, or for COVID testing sites.

"I think there's a recognition that there probably needs to be more oversight, particularly of these of these pop-up clinics," Blank said.

"It's your health. It's your data," Pope said. "Maybe looking back, how confident should I have been in those results? Were those my results?"

These are questions he and thousands of others never thought they'd have to ask.